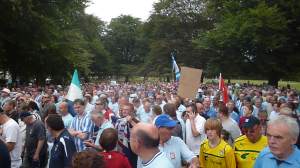 Up to 7,000 people marched through Coventry on Saturday 20th July in protest against the recent decision to move Coventry City F.C’s home games over 30 miles away to Northampton. Though predominantly Coventry fans, there were also supporters from AFC Wimbledon, Middlesbrough, Ipswich Town, Chelsea and Liverpool who attended to show support. 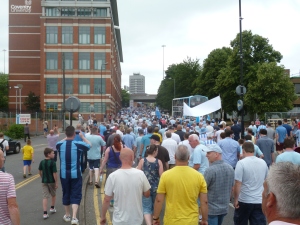 The march started on Gosford Green, close to the Sky Blue’s former home at Highfield Road and following 2 modern day Lady Godivas on horseback, proceeded to make its way to the City Centre along Sky Blue Way. The size of the protest could be seen by the fact that the front of the march reached the end point whilst the back was still near the beginning! 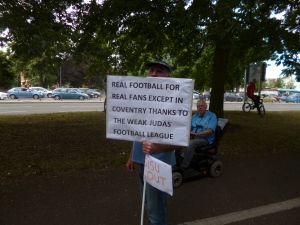 Fans old and young attended the protest – there was anger and dismay, evidenced in the massive turnout but also in the chants and homemade posters and banners that had been made such as ‘SISU OUT’ (SISU is the hedge fund that many blame for the current situation)  ’49 years a season ticket holder – kicked out of CCFC by SISU’ and ‘Real football for real fans except in Coventry thanks to the weak Judas Football League’.

Another banner from Coventry International / Diverse supporters invited the Football League to grow some (specific body part!) in 9 different languages which summed up the feeling of many. 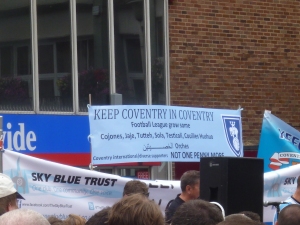 Dave Nellist was invited to address the final rally in Broadgate Square.  Dave pointed out that back in 2003 it was the 3 Socialist Party Cllrs who had the casting vote over whether the new Ricoh Arena would be built. He went on to explain how the Socialists moved an amendment which was passed to guarantee jobs for people in the city, and any profit made from sales of land should go back in to services to care for the old and young of Coventry. 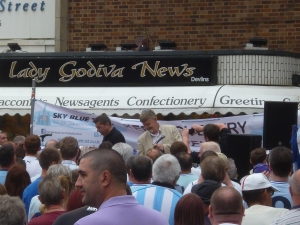 However, Dave pointed out that looking back a mistake had been made. We should have moved an amendment that ensured that the fans had a representative on the Board, as they do in many other countries. Dave went on to point out to rapturous applause that whilst in other countries there are clubs owned by the fans, we have here a situation where a hedge fund that lives offshore is only interested in raking as much profit as possible from the people of Coventry.

Messages of support came from fans groups across the country, including from Bristol City supporters, who stated they are planning to boycott their away game against Coventry (in Northampton) on the first day of the new season. 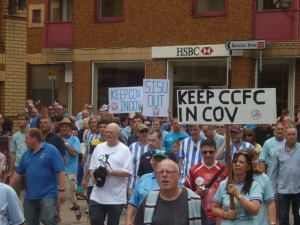 Socialist Party members were on the protest, selling a number of Reclaim the Game pamphlets, and advertising a forthcoming meeting in Coventry on the issue of football and big business. See details below.

The tragedy that has hit Coventry City FC is a perfect example of how these unaccountable profit hungry parasites such as SISU directly impact on working class communities and attack the traditions and culture of ordinary people. They must be stopped and discussions need to take place about how we can get fan and community ownership of football and sport in general.