Coventry protest against the privatisation of the probation service 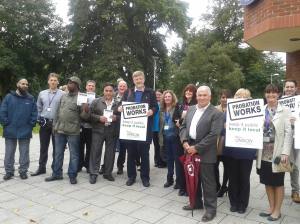 Workers in the probation service in Coventry have staged a protest against the privatisation of this vital public service. Members of NAPO, Unison and GMB organised the lunch time action last Thursday in Coventry. This was part of a national day of action which saw similar protests across the country. Dave Nellist attended to bring the support of the Socialist Party – also raising the issue that evening at a meeting of Coventry TUC.