Report and pictures from university strike action at Coventry and Warwick 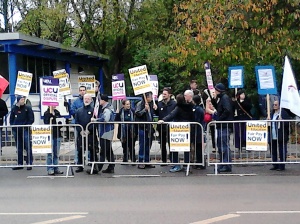 Picket at University of Warwick

Today industrial took place at Higher Education institutions across the country involving members of UCU, Unison and Unite. There were pickets at both Coventry University and the University of Warwick. Members of the Socialist Party visited the picket lines to show support, whilst Socialist Student groups at both universities, together with Socialist Party youth members worked hard to build links between students and university workers on the day and beforehand.

Report from University of Warwick

The mood was clear at the picket at Warwick today, there is a drastic need to take action to defend peoples jobs. The issue of a pay cut was just as important for lecturers and staff becoming increasingly unsure of whether they will get enough work during the quiet periods such as the summer. The issue of people on zero hour contracts and increased casualisation were also mentioned. The idea of a general strike, getting everyone out together, to face the attacks which are the same in every industry struck a chord with the workers.

“It’s sad that the university can’t support its staff the way the staff supports it. People say if you can’t pay for the best then you won’t get the best, so we can’t be the best. If an employer said to you would you take a job that in 4 years we’ll pay you 14% less you wouldn’t take it. A lot of people can’t afford these cuts. There are people having to choose between heating and eating. And we’re having staff at a top university have to make that decision. Its those lowest paid workers at the bottom who can’t afford the pay cuts.” 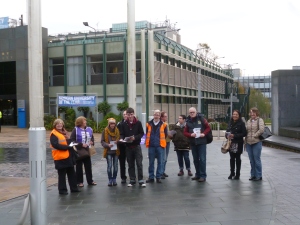 Picket near the Alan Berry Building at Coventry University

There were a number of pickets across the campus of Coventry University, as union members gave out leaflets to students explaining why there were going on strike. Members of Unison from the Coventry District (council) branch attended to show support. Socialist Students members joined the picket to bring solidarity from students. 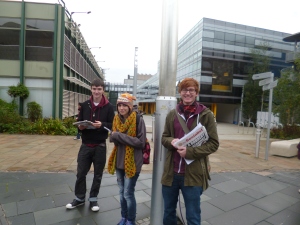 The question of unions from different sectors co-ordinating their many disputes came up time and time again. The need for co-ordination action is not just a good idea, it is a burning necessity which would raise the collective confidence of all workers in the fight against capitalist austerity measures.

One of the leaflets that was distributed

Socialist Party members in the education unions, together with Socialist Students across the campuses, will continue to argue for worker – student solidarity. This is not just a fight for terms and conditions, but a battle to defend education.

If you want to help us, or to join / get more info about the fight for socialism, fill in the form below and we will contact you