Shortly before Christmas former Cllr Dave Nellist, on behalf of the Charterhouse community, asked the City Council to defer any decision on the legal status of the Charterhouse Fields.  As long-standing residents will know Dave had made an application on our behalf for a “Village Green”. This was to give us legal protection for our community’s continued use of the Fields and to limit the expansion of Blue Coat’s control of the park.

The new Blue Coat Academy uses part of the area as a playing field.  Despite huge opposition from the local area, it was granted a formal lease from the Council in 2011 gaining new legal powers over land.  The Village Green application was seen as the only way to maintain our community access and prevent further development on our local fields.

Plans for a new Heritage Park

As a result of the successful ‘holding operation’ of the Village Green application, things have moved on. The strength of the residents’ organisation and the work done over a number of years by Socialist councillors paid off.

The determined campaign by residents supported by work of Socialist councillors was key to all that coming about – without them there was a real risk that the Fields would now be lost to us. 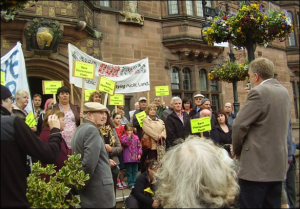 Proud of this local community

“I am proud of the way this local community stood up for itself.  And because of residents’ principled stand the relationship with Blue Coat has started to improve over the past year.  The ambitious plans now for a fantastic new park centred on the River Sherbourne and The Charterhouse could benefit everyone.  There are serious proposals to relocate the school’s use of playing fields to south of the railway line. I am still working with local residents in a positive manner on these plans.  It seems only right that we defer consideration of the Village Green application to see whether those plans can be delivered.

But the Village Green application hasn’t gone away, merely put on hold. And if there is any threat to local people’s continued enjoyment of the marvellous mediaeval heritage of the Charterhouse Fields then, working again with local residents, we can and we will carry on down the Village Green route. Whilst the Council in the past often ignored what local people wanted, this issue of the Charterhouse Fields has shown that residents and socialists working together is the best defence to the real threat of the loss of green space we can all enjoy.”

Lets keep up the good work together!

Get in touch for info and details…