Revolutionary women and the fight against austerity – Part One 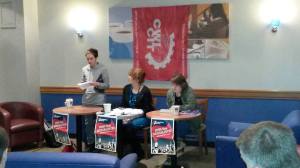 Last week the Socialist Party in Coventry held a meeting to celebrate International Women’s Day. The meeting discussed a wide range of issues concerning women and the wider struggle against capitalism.

We are pleased to be able to produce below the speech (slightly edited for publication) from the first speaker, Non Frenguelli. Non is a Socialist activist and school student. We will be publishing the speech given by another member, Ellen, shortly

Women and the fight for socialism

When it comes to women in parliament, Britain currently places 53rd in the league tables. This is behind Uganda, Afghanistan, Iraq, Sudan and Pakistan.

Why are women so underrepresented in our political system?

Why are we still earning at least an average of 10% less than men?

Why are ¼ of us still going to be beaten by a partner at least once in our lives?

We’re heard the march of progress theories, and I’m not saying our situation hasn’t improved because it has a damn sight. But an improvement is just that- an improvement. It’s better, but it’s not the best. And why should we settle for anything less than the best- full equality?

Why is it that I’m told I can’t wear a skirt to school because it’s “unfair on the male teachers”?

Why is it that I’m told not to catch the bus home late wearing short shorts, not because it’s cold, but because I’ll attract unwanted attention?

It’s not right that 36% of the people in the UK will tell us it’s at least partially our fault for getting raped if we were drunk. And it’s not ok that 26% will tell us the same for if we were dress in a sexual manner.

In a country where only 77% of young men agree that having sex with someone who has said no is rape, can we really claim we are reaching equality?

Comrades, equality has come along way, but we are far from equal.

We are currently in a public political meeting, a meeting that is aimed women, I am talking to you about women in politics – and we can say that we need more women in our movement.

This HAS to change. We NEED to harness the potential of our female comrades. We are fortunate in the Socialist Party in that our Executive Committee is majority women. Our campaigns against austerity are disproportionally relevant to women as women are affected by austerity disproportionally. With women taking up 2/3 of public sector jobs, women suffer more when these jobs are cut. On an average day, Women’s Aid has to turn away 9% of all women seeking refuge, due to cuts to funding. Women are suffering more under the current government and it’s our party putting up the strongest fight.

With Labour promising to continue the vast majority of cuts brought in by the Con/Dem government, we can’t rely on any of our current politicians to fight for us. We have to step in where our politicians have fallen dismally behind.

We have one of the largest student section out of any of the left wing parties. We have an active presence in communities around the city. We punch well above our weight in terms of our work campaigning on a wide range of issues from cuts to the NHS, parking charges at Walsgrave hospital, and fighting for an increase in the minimum wage. Out of everybody currently working on minimum wage, 70% of them are women. This campaign, if it succeeds, will have a dramatic impact on the working lives of millions of women.

We fought for paid maternity leave

We fought for union rights

We fought for minimum wage

Comrades, time has shown us that if we want anything, we have to fight for it.

Only with a revolutionary party that is willing to go the whole slog and fundamentally change society to a more equal one- can we finally have true equality and smash the patriarchy.

Comrades, it sounds extreme but if we’re to smash the patriarchy- we have to smash capitalism.

So why don’t you join us?

Agree with Non? Fill in the form below for more information about joining the Socialist Party