Revolutionary Women and the fight against austerity – Part Two 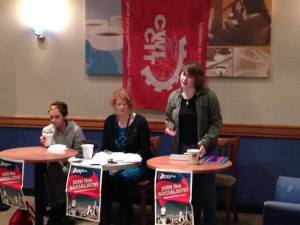 Ellen White speaking at the meeting

We are pleased to publish the second and final speech from our meeting to mark International Women’s Day. Below is the speech from Ellen White, a member of Coventry Socialist Party. It has been slightly edited for publication. Part one can be viewed here

Women and the fight for socialism

When I got offered the opportunity to speak today I found it quite daunting. Not because I couldn’t think of anything to say but because I could think of so many revolutionary women to talk about. The sad thing remains that most people have never even heard of these women and don’t fully appreciate what they have done for all of us.

Women have played an important revolutionary role throughout history. Well, Obviously some of you may say, after all we do make up 50% of the population and we have been here the whole time!

I suppose that the best example of revolutionary women was in the Russia Revolution. However historically women have largely been ignored in politics. Society managed to create the image of “woman” as timid, weak and even insincere. We have been subjugated and oppressed, associated with the home and the private sphere too much. Capitalism has doubtless benefitted form this is in varying degrees. While men worked we raised children and kept capitalism ticking along. For a long time women essentially provided free labour. We were even excluded from education.

So when women begin to openly revolt it is often for the simplest things, which can signify the most in so many ways. In 1917 the loudest cry that could be heard from the crowd in St Petersburg was for bread, and this cry was begun by women. Later people demanded freedom, democracy and revolution but arguably this was the beginning of one of history’s most important events.

This wasn’t the first time women had initiated movements and revolutions. The march on Versailles in October 1789, which now accepted to be the earliest and most significant event of the French Revolution was started by women in the marketplace who were near rioting over the price and scarcity of bread.

This developed into angry mobs, teaming with the poor and the oppressed who then marched to the palace of Versailles and by the next morning the Royal family and the entire French assembly were compelled to return with the mob to Parisand we all know what happened next! This was also the first open threat to the king’s authority.

Women today are now largely expected not only to take care of the family needs but also to work. The abilty to juggle all these things has been drastically affected by the government’s austerity measures.It is women who are suffering the most. Not now because of the need for bread, but because of the need for childcare, for benefit support in order to even go to work, to get enough money to buy the bread. Single mothers more than any other group are the people who rely on state benefits in order to merely provide food for their families. These are the state benefits that are being cut. This is why in one of the richest countries in the world families are going to food banks while others sit on riches. There is definitely something wrong with this system and we know from history that it’s not the women.

Sadly it has often been women that have suffered the hardest; countless studies will tell you that women will go without so her family can eat a full meal. Under this government the working classes are being attacked left, right and daycare centre.

If you are working class and women this is not just austerity, this is enforced poverty and we will not take it with solemnity. We should and will revolt.

I will leave you with children poem that I think most of you will know, that will illustrate my final point.

For want of a nail the shoe was lost.

For want of a shoe the horse was lost.

For want of a horse the rider was lost.

For want of a rider the message was lost.

For want of a message the battle was lost.

For want of a battle the kingdom was lost.

And all for the want of a horseshoe nail.

History’s nail was bread. It was the peoples want for bread that led them to question and revolt. Had the rich just appeased them perhaps they would have accepted the rest as they done. Today’s nail is austerity. When the rich have lost their kingdom, through their own greed, they will look back on this day and regret that they hadn’t just given us what we rightly deserve now, because now, the only way is revolution.