The following article was written by Rob McArdle who is a campaigner for the Trade Unionist and Socialist Coalition (TUSC) and the Socialist Party. He is also a member of the Communication Workers Union and stood for TUSC in Lower Stoke ward in the recent local elections. The article was published in the current issue of ‘The Socialist’ newspaper.

On the very week Royal Mail reported a 12% rise in operating profits to £671 million, the newly privatised company was complaining about ‘market competition’ from the likes of TNT.

It’s ironic that directors at Royal Mail recently toured the country seeking to convince workers that ‘external investment’ was the only way forward for Britain’s postal service.

As we have highlighted in the Socialist, privatising Royal Mail would be a big mistake for the public. And now, within months of its undervalued sell-off, the threat to the universal postal service is again on the agenda.

The daily delivery service to the 29 million homes and businesses is threatened because competitor companies like TNT cherry-pick end to end delivery in places like London and Liverpool.

The industry regulator Ofcom responded by saying: “We would expect Royal Mail to take appropriate steps to respond to the challenge posed by competition, including improving efficiency.” In reality this means increasing workloads and pressure on postal workers.

The threat of reducing the six-day delivery service would have a significant impact on jobs and services within Royal Mail.

It could also be used by management as a weapon to try and force through inferior working conditions and also have an impact on future pay deals.

Over the next few years we will see the battle lines being drawn between a management driven by market profits and the CWU union, who will need to defend their members against vicious cost-cutting attacks.

The historic deal that has just been signed by the CWU and Royal Mail protecting jobs and conditions, will be tested over the next two years. Postal workers are right to be concerned about their future once the agreed pay deal comes to an end. Thousands of jobs were lost at BT after privatisation of the telecoms company and those remaining workers have seen their terms and conditions weaken due to the ‘partnership’ between management and the CWU.

The lesson for postal workers is clear – they need the union to fight to protect the gains made over the years. Royal Mail bosses will continue their race to the bottom as they seek to increase profits for shareholders but the CWU will need to stay alert to the dangers of ‘partnerships’. Workers’ ultimate power lies in the ability to withdraw their labour as a last resort.

The solution for Royal Mail’s difficulties is simple; take it back into public ownership. Then the postal service could be delivering a service based on public need not on private greed.

Dave Nellist says thanks to all Socialist voters

The following letter from Dave Nellist appeared in the Coventry Telegraph newspaper today.

Could I use your columns to thank all those 2592 people across Coventry who voted last Thursday for the Trade Unionist and Socialist Coalition (TUSC), and especially the 974 people who were good enough to support me personally in St Michael’s.

Although not large enough to win a seat I know that, in many cases, those voters are people who have supported socialist ideas through many elections.  I suspect over the next 2 or 3 years they will be joined by many more who, having put their faith in larger parties at this election, will be disappointed.

The Local Government Association (LGA), the national body of councils to which Coventry belongs, brought out a report 3 weeks ago.  In that report the LGA predicted, whichever party wins the general election next year, cuts in local services, for example leisure centres, libraries, youth services and many others, will continue until the end of the decade.

If that is the case, then I believe many thousands of people in the city will be looking for a socialist and trade union based alternative to parties which either instigate those cuts in Westminster, or fail to defend us from those cuts on the Council.

It was for that reason that the late Bob Crow, then the general secretary of the transport union RMT, co-founded TUSC 4 years ago.  It’s also the reason why a growing number of active, and in some cases senior, trade unionists including firefighters, local government workers, civil servants, teachers, prison officers, as well as union activists in private industry, feel the need to start again and build a new political party for working people rooted in the organisations and communities of the working class.

TUSC is only at the beginning of that road.

Once again, my thanks to all those who supported us on May 22nd.

Socialists campaign all year round, not just before an election!

Dave Nellist and the Socialist Party continue campaigning against austerity

Despite the pouring rain the Socialist Party were out in the city centre today, talking to people about the local election results from Thursday night and continuing the campaign against zero hour contracts and for a £10 per hour minimum wage. The Socialist Party stood as part of the Trade Unionist and Socialist Coalition (TUSC) and received over 2,500 votes in the city. We will shortly be posting our analysis of the results and what they mean. What is clear though, is that austerity will keep hitting ordinary people and that the current system backed up by the three big parties and UKIP offers a bleak future for the 99 per cent.

Stand up for coventry (2)

Support our firefighters! Pictures from the picket line

Firefighters are currently taking industrial action against robbery of their pensions . Members of the FBU took action yesterday, and there will be further action today and tomorrow. They are under attack from the government and their employers, and need your support. For more information click here to read an article in the latest issue of ‘The Socialist’ newspaper.

Dave Nellist, chair of the Trade Unionist and Socialist Coalition (TUSC) and member of the Socialist Party visited the picket line at Radford to show support and solidarity. Please see below for pictures. 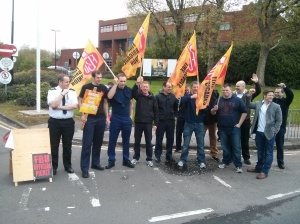 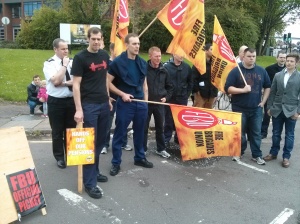