Hundreds rally at Warwick University against racism and fascism 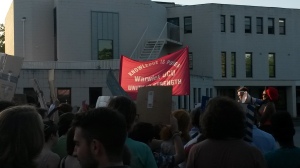 UCU banner on the protest

Over 200 students rallied today at Warwick University against racism and fascism in a fantastic show of unity and solidarity. The protest was prompted by the presence on campus of a student member of the openly fascist National Action group which featured in a recent article in the Mirror newspaper (see link here)

Students from a wide variety of backgrounds were mobilised by the Warwick Anti-Racism Society, with support coming from members of trade unions based in Coventry such as Unison, PCS and NUT, as well as the UCU branch at the university. 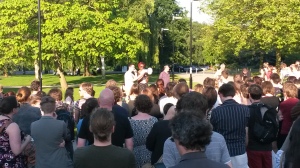 Dan Crowter, a member of the National Union of Teachers (in a personal capacity) and the Socialist Party brought greetings from his union, and called for a united fight for decent jobs, homes and education, which was met with applause.

All of those involved in the organisation of this protest and everyone who attended should take massive credit for an excellent event. Many speakers rightly said that this can’t be a one off and discussions will take place about how we can build a movement against the far right. Socialist Students will continue to put forward the idea of unity between students and workers, and for a socialist programme that can lead the way out of this barbarous capitalism system that blights the lives of the 99 per cent.