Around 150 people gathered outside the Council House in Coventry to protest against Israel’s continued onslaught on Gaza. The mood was both sombre and angry as people read the names of the hundreds of innocent children who have been killed by Israeli state terror. Unfortunately this list is growing by the hour, with the latest attacks on Gaza perpetrated by the IDF.

The names of children murdered in Gaza were read out

It is not only the inhumane slaughter of innocent people. Hundreds of thousands of Palestinians living in Gaza have been displaced, their homes and communities being reduced to rubble, with little or no access to basic amenities. The situation is nothing short of barbarism. 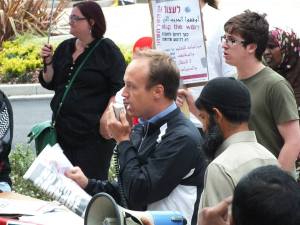 Socialist Party member Paul Hunt speaking at the protest. Anti-war placard from Israel / Palestine can be seen in the background – in Hebrew, Arabic and English

Socialist Party member and Coventry Unison assistant branch secretary Paul Hunt spoke bringing solidarity for the people of Palestine from trade unions in the city.  He drew attention to the anti-war protests in Israel and the West Bank and the slogan raised by the Socialist Struggle Movement in Israel / Palestine (sister organisation of the Socialist Party)– “Money for jobs and education, not for war and occupation” which has been produced in Arabic, Hebrew and English . The protests in Israel are as yet small, however 6,000 have rallied in Tel Aviv and other Israeli cities, with a common slogan being ‘Jews and Arabs refuse to be enemies.’

He also echoed the feelings of many on the demo when he said that the Palestinians can’t rely on any capitalist political leaders – the US and the UK have been sending money and arms to Israel, and Labour leader Ed Miliband described himself as a Zionist. The Egyptian Government are maintaining the blockade of Gaza, which keeps the Palestinian people in poverty and locked in an open air prison. We can’t trust establishment politicians to support Palestine. Rather it will be the support, solidarity and crucially mass action of workers and ordinary people across the Middle East and indeed the world which will be the only reliable source of support for the Palestineans.

The crowd on the Council House steps

Coventry’s Labour council leader Ann Lucas and deputy leader Phil Townshend both spoke at the demo and expressed solidarity with the Palestinian people – this is welcome, but what actions will Coventry Council take to support the Palestinians? They have refused to fly the Palestinian flag from the council building, which would be seen as a basic gesture of solidarity and support.

There will be more protests in Coventry in the future and we urge as many people as possible to attend the national demonstration for Palestine that will be taking place in London, Saturday 9th August. There will be transport from Coventry. Contact us for more details

If you want to join the fight for a socialist solution to the crisis in the Middle East, please get in touch by clicking here