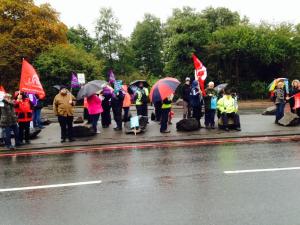 NHS workers in six unions: Unison, Unite, GMB, Royal College of Midwives, Ucatt and BAOT went on strike for four hours this morning over pay, the first NHS national strike over pay for 30 years.  The government has reduced real terms pay by 20% for many public sector workers over the last four years. In actual fact many public sector workers have been effectively on a pay freeze for between six and eight years.

Socialist Party members were out supporting the pickets lines in Coventry this morning. Below are some photos from the pickets  at Walsgrave Hospital and the Walk-In Centre just outside of the City Centre. 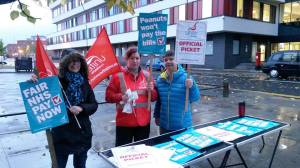 Unite picket at the Coventry NHS walk-in centre this morning

Strike to save our NHS!

By an NHS worker

The National Health Service (NHS) is mired in a deep financial crisis and in a desperate attempt to highlight this a body of health professionals have written an open letter to the government.

A conservative estimate says the NHS shortfall amounts to a black hole of £30 billion but others put this figure closer to £50 billion.

We see desperate patients in pain and distress waiting for appointments for scans and treatment and when frontline staff complain to management we are fobbed off or told ‘you must do more work’.

We have seen our own pay frozen in the face of the increasing demands being put on us. Many more of us face being demoted and downbanded as fat cat private companies continue to leach off our NHS.

The Tory funding freeze, which they deceitfully call ‘ringfencing the NHS budget’, is one factor behind rising NHS debt.

However the introduction of Private Finance Initiatives (PFI) into the NHS and their rapid expansion by New Labour in the late 1990s created a financial time bomb which is now about to detonate.

When PFI was being rolled out the Labour party allowed consortia of building companies and financial houses to flood into the NHS to build and refurbish hospitals at extortionate rents, spanning 30 years. Several NHS trusts have gone bankrupt as result of PFI debt.

We are also seeing a rise in the privatisation of core health care services, and NHS trusts are paying huge sums to buy in services from private companies who offer less. On top of this there is the added financial burden of administering these contracts. The state of hospital meals post-privatisation is a warning. They are so dire that this issue has hit the headlines.

The privatisation of public services leads to rising costs, worse services and increased charges for patients. Hospital bosses are now talking of charging patients £75 a night for the ‘hotel costs’ of staying in a hospital. In the USA 62% of all bankruptcies are as a result of medical bills.

The NHS staff appeal to the Tories will fall on deaf ears. The Tories will carry on with their policy of freezing the NHS budget if they get re-elected.

The Labour party pledges £2 billion in ‘new money’ to the NHS but this is woefully inadequate considering the funding black hole. Whichever mainstream party gets elected the tranche of cuts and the damage wrought by the privatisation of services will continue.

Nurses and other NHS workers are demoralised and desperate. For the first time in over 30 years unionised health workers are coming out on strike over our pay on 13 October. Industrial action is the most effective measure we can take that will force this government to take the future of the NHS seriously.

Half a day’s action can be a starting point to escalating the industrial action in co-ordination with the other trade unionists in the public sector who provide essential services for our patients.

Our patients need us to step up and fight to prevent the total destruction of the NHS. If we can’t fight for ourselves let’s do it for them! 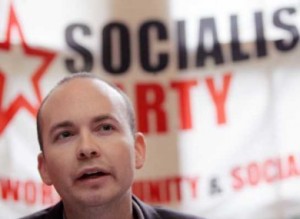 The Anti Austerity Alliance celebrated a major victory in Ireland today after Socialist Party member and former MEP Paul Murphy won the Dublin South West by-election, beating the establishment parties and Sinn Fein. The Irish working class is bravely resisting attacks from the establishment such as water charges and the property tax, and the AAA was formed as part of the anti-austerity campaign. There are now 3 Socialist Party TD’s (MPs) who are part of the AAA as well as a number of councillors, and these electoral gains are being used to build the fightback. Former Labour MP and national chair of the Trade Unionist and Socialist Coalition, Dave Nellist, said

“Paul’s 3 years as an MEP showed his determination to match socialist ideas with direct, solidarity action on behalf of working people – most notably when he sailed as part of a flotilla trying to break Israel’s blockade of Gaza. He’ll make an excellent addition to the Anti Austerity Alliance team in the Irish Parliament.” 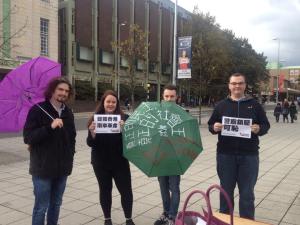 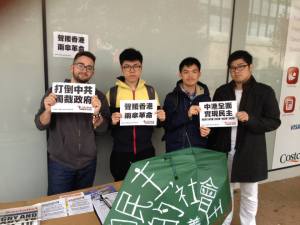 Coventry Socialist Students took to the streets this week to talk to students about the protests that haven taken place in Hong Kong in the pursuit for true democracy. We set up our stall in the main courtyard on campus, where the main hub of activity takes place. For the first 20 minutes we distributed leaflets, petitions and having great conversations with students about the events taken place and the actions of Socialist Action in this tremendous movement.

However it wasn’t long until two police officers showed up to inquire into what we were doing, we explained and they asked if we could move off university property. We declined that option after stating as students we had the same right to use this student space like anyone else. Two more university security staff members came and eventually two members of university management afterwards, when the dust settled and all the excitement of police, security and university workers inquiring into our activities was done we carried on as usual.

The day carried on with dozens of students taking photos holding Socialist Action slogans and umbrella’s to demonstrate solidarity with the brave individuals using umbrellas to defend themselves whilst facing the rubber bullets and tear gas being used upon them by Chinese authorities. We had students from all different backgrounds and countries (including mainland China & Hong Kong) approaching us on this issue. Alongside the great show of support, we also made over 10 contacts and a number of papers sold. 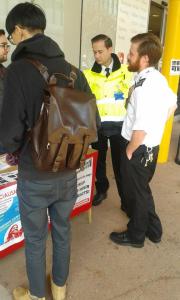 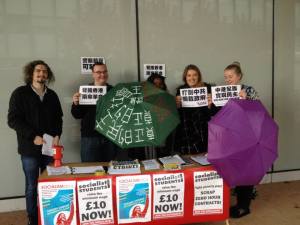 In regards to social media, dozens of Chinese students took photos to share with family back home, within hours over 1000 people have clicked to view our photo album of the stunt on our Facebook page and counting.

Many other students identified with the need for an alternative form of society, a socialist society where democracy is more than just a dream for some but a reality shared by all.

Check out the photo album here

And for updates from the Socialist Party’s sister organisation in Hong Kong – http://www.socialism.hk 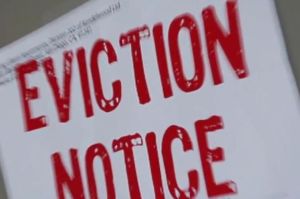 Recent figures released by the Ministry of Justice show that in the past 12 months 1,392 families in Coventry were threatened with eviction – more than four every day. This shocking statistic is part of a growing problem in Coventry and across the country, as more and more of us struggle to make ends meet because of cuts and rising living costs.

Many of these families are in rent arrears because of the “bedroom tax”, and as a result are being threatened with eviction. One of the housing associations threatening to evict tenants is Whitefriars, which has 3 Labour councillors on its board – they should be fighting the bedroom tax, not threatening those affected by it!

Coventry’s Labour Council lets landlords exploit tenants with few restrictions, and has taken no action over the growing number of eviction threats being made and the increasing problem of “landlordism” across the city. However, this is perhaps unsurprising as, according to the Coventry Telegraph, 8 Labour councillors are landlords themselves! 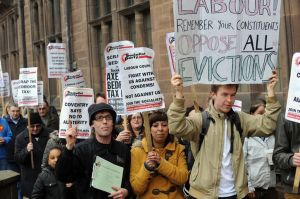 Coventry Council should be fighting cuts, not implementing them – and building decent homes for people to live in. There should be compulsory registration of landlords and a cap on rents. Now someone putting that forward would be worth voting for! 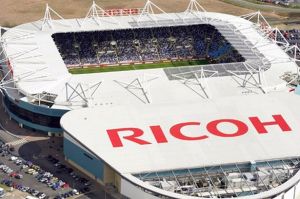 After spending a year playing 35 miles outside Coventry in Northampton, CCFC’s recent return to the Ricoh Arena was welcomed by football fans across the country. Despite this step forward, however, the issues over the ownership of the club and the stadium have continued. A recent bid from London Wasps Rugby Club to purchase ACL, the company which runs the Ricoh, has been accepted unanimously by Coventry Council, putting the future of CCFC and Coventry Rugby Club in doubt.

The bid has been accepted without a full public consultation, and without the people of Coventry knowing the full details of the deal. The Wasps chairman, Derek Richardson, now owns 100% of ACL, having paid Coventry Council and the Alan Higgs charity £2.77million each, and taking on ACL’s £14.4million loan from the council. The council claims this deal is best for the club and the people of Coventry – but how do we know if they don’t give us the full details? Our money built the Ricoh, now it’s being stolen from us by a rich businessman from the other side of the country who couldn’t care less about us or our clubs!

In 2003 when Coventry Council was debating building the Ricoh there were 3 Socialist Party councillors who held the balance of power on the council and forced a full public consultation and debate. The views of the people of Coventry and Sky Blues fans were sought and as a result the Socialist councillors voted to build the new stadium. The current makeup of the council, with 43 Labour and 11 Tory cllrs, has led to a unanimous decision taken behind closed doors to lease out our stadium for 250 years – and we don’t even know the details of the bid! 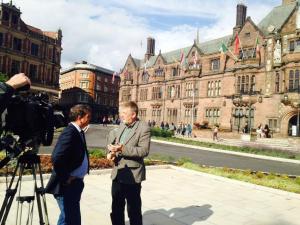 Dave Nellist speaking to the press today about the sale

Coventry already has a rugby club and a football club – London Wasps relocating here threatens both of them. CCFC fans can also sympathise with Wasps fans whose club is being moved 80 miles across the country – why should they lose their local club?

SISU and the council have shown repeatedly that they don’t have the best interests of the club of the people of Coventry at heart – the businesspeople who own Wasps don’t either. They’ll keep on selling us down the river – the club should be owned and run by the fans. 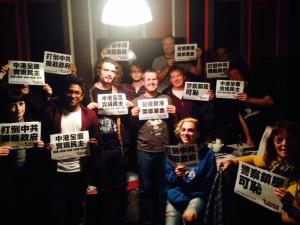 Party members show support for the movement in Hong Kong

During the last week members and supporters of the Socialist Party in Coventry have been building support and solidarity for the mass democracy movement that has erupted on to the streets of Hong Kong. At one of our branch meetings this week, attendees displayed posters produced by our sister organisation in Hong Kong, Socialist Action who have been linking the fight for democracy with the need for socialist change.

Meanwhile our members at the University of Warwick spoke with hundreds of students from China and Hong Kong, raising awareness of the work of socialists in Hong Kong and building solidarity on campus. 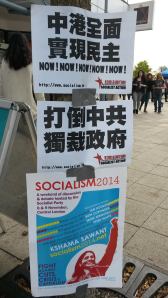 Socialist Party members will continue with this work over the coming weeks. We would encourage  anyone interested in finding out more to read the socialist perspective on current events by reading this article, produced by Socialist Action. To read it, click here