Coventry Council announced today that disabled children’s transport to school will continue to be funded for at least another year, after protests over the planned cuts.

Over 50 people protested last month outside the Council House, including Socialist Students and TUSC activists as well as members of Warwick for Free Education. The protest was organised by community campaigner and DPAC member Eleanor Lisney.

This victory shows that protest and pressure works, and councils can be forced to back down over planned cuts – however, as the funding has only been guaranteed for another year it shows the importance of keeping that pressure up, both in terms of protest and electoral challenges to councillors who continue to vote for cuts. 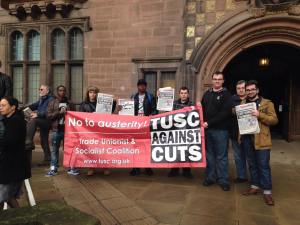 It is urgent that the Council use the £80million+ reserves to stop any cuts to buy time to build a mass fightback in the city, linking up with other councils, to demand proper funding from central Government.