“Either We Fight, Or We Lay Down And Die” – Protest At Coventry City Link 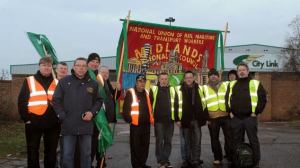 City Link workers and RMT activists on the protest

Dozens of people protested outside City Link’s Coventry office on New Years Eve against the company’s disgraceful sacking of almost 3000 workers, and to call for nationalisation of the firm.

The mood of the protesters was defiant and angry, and the most popular chant summed up many people’s thoughts – “Nationalise City Link, put the bosses in the clink!”

RMT, Socialist Party activists, TUSC supporters and City Link workers from Coventry and across the country joined the demonstration, including a group from Scotland. One of them, Mick, worked at City Link with his son and daughter – all 3 now face being made redundant. 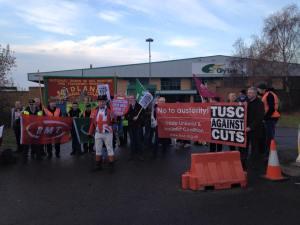 “Management spoke to us two weeks before Christmas and said everything was fine and the rumours about the business were untrue.” he said. “Then they wished us a happy Christmas and New Year. They just kept lying to us.”

When asked what he thought City Link workers should do now, his answer was clear; “Fight. What else can we do? Either we fight, or we lay down and die.”

Many workers are being told they won’t be paid for any of the overtime they worked in the weeks before Christmas – some were working 12-hour days, 7 days a week! Not only are these workers threatened with redundancy, their bosses are refusing to pay them! 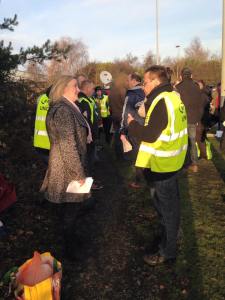 City Link should be nationalised immediately, and run under democratic workers control and management – with compensation only paid on the basis of proven need. The books should be opened and investigated by City Link workers and trade unions, to see where the money has gone.

The RMT has organised protests like this across the country – this is the start, not the end, of the fightback.

One thought on ““Either We Fight, Or We Lay Down And Die” – Protest At Coventry City Link”