Looking Back at 2014’s Heroes and Villains!

2014 was a year that showed the brutal nature of capitalism on many occasions – and also the strength and power ordinary people have when we fight back! So here’s our list of 2014’s heroes and villains.

Nigel wondering how much to pay himself next year

So what has Nige done to justify this salary? Well, at the start of December he defended the shocking violence used by police against peaceful student protesters – they were CS sprayed, slammed to the floor and threatened with a taser. The University management then sought an injunction against students who were peacefully occupying part of the Rootes building – and successfully managed to ban occupations on campus indefinitely. Despite this, not only has Thrift given himself yet another pay rise – he’s also been given a knighthood!

So Thrift is definitely on our villains list – but it’s not all bad at Warwick!

There were a number of demonstrations at Warwick last year, organised by various different groups. In June, after the media revealed that a member of the openly fascist group National Action was studying at Warwick, over 200 students joined an anti-fascist demo to oppose them and other far-right groups.

Over 1000 students gather at Warwick for #copsoffcampus protest

In December after a peaceful sit-in demonstration was viciously attacked by police, Warwick students immediately organised a #CopsOffCampus demo in response, which was attended by around 1000 people! Hundreds of students then occupied the top floor of the Rootes building in protest, and issued a list of demands to the university – rather than responding to the demands, management organised “negotiations” which were a sham, and sought an injunction against the occupiers. Despite this, students are planning to keep fighting in the new year – so they’re very much heroes of 2014!

After the actions of Coventry Council in 2014 no list of villains would be complete without including the council’s Labour leader Ann Lucas, who has happily signed off on cuts to thousands of jobs, loads of crucial services and even cut funding to local charities like Coventry Haven.  The council’s “City Centre First” plan, if carried out, will devastate the city’s services. 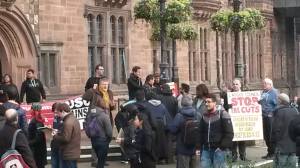 Anti-cuts protestors outside the Council House

The Council also sold the Ricoh Arena to Wasps for a pittance, threatening the existence of CCFC and Cov Rugby Club.

One particularly vicious cut planned by the council was to cut transport to school for disabled children – however they went back on this after a protest outside the council house!

Throughout the year there have been repeated protests against cuts being carried out by Coventry Council. These have been organised by different organisations including Coventry Against the Cuts, Disabled People Against Cuts and a number of different trade unions – and supported by the Socialist Party and TUSC. As mentioned above, one of these protests – against cuts to disabled children’s transport – forced the council to reverse their plans.

The position of Coventry TUC, Coventry Unison, TUSC and the Socialist Party is that the council shouldn’t simply carry out the Tory cuts, but should use some of their £81million reserves to fund services for a year and buy them some time to build a campaign to demand the rest of the money from central Government.

Workers have been under attack from this Government since they took power, and continued to fight back in 2014. Teachers in the NUT went on strike in April against attacks on the education system, and over 800 joined a rally in Birmingham on the day. The Fire Brigades Union has taken strike action repeatedly throughout the year against the Governments plans to cut their pensions and make them work until they’re 60. PCS members in HMRC also took action in June, and again on July 10th. 6 unions (Unison, Unite, GMB, FBU, NUT and PCS) took action on “J10” and 500 workers rallied in Broadgate against the cuts!

Industrial action is a key weapon available to the working class to fight the bosses – in 2015 we need to develop co-ordinated national industrial action between the unions and develop and support local community campaigns to defend services. At the same time, we should build the Trade Unionist and Socialist Coalition to develop working class political representation that can challenge the Westminster mainstream parties who are united behind the same austerity agenda.