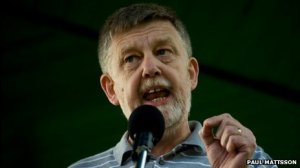 Yesterday it was announced on the website of the Coventry Telegraph that Socialist Party member Dave Nellist will be standing at the General Election in the Coventry North West constituency.

We are pleased to carry the full press release below. Our campaign will be unlike any other political party in this election. We will be taking a socialist and anti-austerity message to the people of Coventry North West. We will be saying that ordinary people did not cause this capitalist crisis and should not be made to pay for it.

Over the coming weeks we will be announcing details of Trade Unionist and Socialist candidates for the other two parliamentary seats, as well as for all 18 wards in the Council elections due on the same day.

To make this as effective as possible we need your help

There are many other ways you can help, get in touch by filling in the form at the bottom of this page if you can help or to get more information. We would also encourage you to join the Socialist Party. Nothing will ever change unless we get organised! To apply click here

Nellist to take election fight to the “Westminster establishment”

The Trade Unionist and Socialist Coalition (TUSC) has announced that former Labour MP, Mr Dave Nellist, will contest the Coventry North West seat in May’s general election. TUSC was co-founded in 2010 by the late Bob Crow of the transport union, RMT, together with the Socialist Party and other socialist groups, to provide an electoral alternative for those opposing austerity. Mr Nellist, a former Labour MP and Socialist Party councillor in the city, said:

“If they win the general election the Tories intend to increase the pain of austerity. But Labour are no real alternative, as they have also signed up to similar levels of cuts. Frankly, it makes little difference which big party you vote for. What Coventry needs is an MP who will oppose austerity from whichever party it comes, and stand up for local people against the Westminster establishment.”

Mr Nellist believes TUSC offers a radical alternative to all the major parties in the general election. Key policies he intends to highlight in the election campaign include:

Asked whether he would rather be fighting the sitting MP, Geoffrey Robinson, or the still to be totally quashed rumours that Tony Blair’s son, Euan, is still being lined up for the seat, Mr Nellist said:

“The last thing the people of Coventry North West need is an establishment lackey from the political classes parachuted in to our city. But whoever the Labour candidate is, I won’t need a map or a chauffeur to get around the constituency, because I live here.”

Mr Nellist, who was the Labour MP for Coventry South East from 1983 to 1992, was expelled from the Labour Party for his socialist views and consistent opposition to Tory policies such as the Poll Tax.  He famously only took the same wage as a skilled factory worker in Coventry, a commitment he has again made if elected.

“People say that all the establishment parties are the same. They are right. If elected I intend only to take the average wage of a skilled worker in the city – less than half the wage MPs currently get. I’ve always believed MPs should be prepared to live exactly the same as ordinary people in ordinary jobs – not on a wage that insulates or isolates them from day-to-day problems.”

GET INVOLVED, CONTACT US FOR MORE INFORMATION AND TO HELP!