107 people packed in for the rally

Socialist activist and TUSC candidate for North Warwickshire, Eileen Hunter, opened the rally with some reflections on her campaign in the closest marginal seat in the country. John Boadle from Coventry Against the Bedroom Tax then spoke about the planned eviction of Archie Millar, a Coventry resident hit by the bedroom tax, that was prevented by socialists, TUSC candidates and neighbours. Archie was applauded for his strength in fighting back – community campaigners can win! 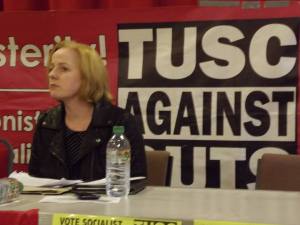 Ruth then spoke about the situation in Ireland, where there has been a mass movement against austerity, including huge demonstrations and non-payment of water charges. She also spoke about the campaign for a Yes vote in the referendum on same-sex marriage, and against the ban on abortion. Dave Nellist spoke to close the rally, and addressed a number of issues about cuts and austerity. He pointed out that the £70billion+ in bonuses given out by banks since the financial crisis is equivalent to the cuts made to the public sector, and that the super-rich have increased their wealth in that time – “there’s enough wealth in this country, it’s just in the wrong hands!”

The rally showed the potential to build the anti austerity socialist alternative in Coventry, something we will continue to do after the election. The election is on Thursday, but Socialists won’t stop campaigning on Friday morning – we’ll keep fighting all year round. Want to help TUSC? Fill in the form below and get involved!

One thought on “Packed room for Socialist election rally”