The Herbert faces closure due to austerity cuts

Coventry Council has taken aim at funding for the Herbert Art Gallery and the Belgrade Theatre in its next round of austerity measures, with £250K of cuts planned for each of them.

Just a few months ago staff at the Herbert Art Gallery, run by Culture Coventry, were threatened with the sack unless they agreed to new terms and conditions for their work, including huge pay cuts. Now their jobs are on the line due to council cuts – and the future of the Herbert is at risk as well, as the cuts could lead to its closure.

The Belgrade has already warned that if its funding is cut it may be unable to continue supporting local grassroots productions, negatively impacting theatre groups in the city.

For a city that is bidding to be “City of Culture”, the council seem set on attacking the “culture” we have. Libraries, theatres and galleries face closure, along with many other services across the city. Coventry has a wealth of culture and history that we can be proud of – from poets like Philip Larkin to bands like The Specials, our city has created more than our fair share of working class talent. Slashing funding to theatres and galleries will stifle that spark of creativity.

Another eviction stopped in Coventry 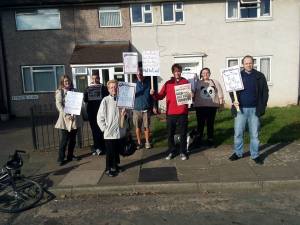 Coventry Against the Bedroom Tax campaigners went into action at very short notice a few days ago. For the second time in a few months we stopped an eviction planned by Whitefriars housing association. CABT chair John Boadle wrote this report.

Holbrooks resident Steve G was in such a low state from illness and benefit cuts that he had been unable to deal with it and only phoned me the afternoon before bailiffs were due at 10.30am to throw him onto the street.

We set to work as a team. I phoned Whitefriars to tell them we wouldn’t allow an eviction – and remind them of the embarrassing blaze of publicity we caused them last time! They wouldn’t back off but offered last-second negotiations in the morning.

While some Socialist Party members contacted people asking them to come out in the morning, I went round to get the full details. It turned out to be other benefit cuts that had driven Steve into rent arrears, not the bedroom tax. This gave some cause for thought, but so what? We couldn’t just walk away.

In the morning Steve, Dave Nellist and myself met Whitefriars managers. Dave calmly explained that with proper benefits advice there were a number of ways the position could be sorted out. Mindful of the blockade assembling outside Steve’s house at that very moment, the managers backed down and went with us to the County Court to seek suspension of the eviction order.

While this was happening I drove up to Steve’s house and spoke to the protesters. Twelve people had made it, which at zero notice on a working day wasn’t bad, and they had already knocked on neighbours’ doors to tell them what was happening. I explained that we had won, but only because they had made the effort to get there.

Two of us waited with Steve’s family for him to get back. An appointment to get expert benefits advice had already been made and it was great to see the looks on people’s faces changed from despair to hope. There are people out there who will help, if you ask the right ones. They had asked Geoffrey Robinson MP to help, but their call was only returned by an assistant that afternoon; he would have been talking to homeless people if it wasn’t for us!

We’d like to thank everyone who took part. We’ve now prevented two evictions at the eleventh hour, and we’ve helped a few more people before it got to that stage. With Tory benefit cuts biting, the situation will be looking even bleaker for ordinary working class families – that’s why we need a fightback against austerity now more than ever!

Lively protest to save Coventry libraries 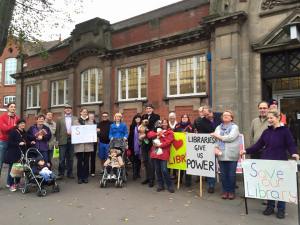 Save Coventry Libraries organised a demonstration on Saturday at Earlsdon library with very short notice. Dozens of people attended of all ages. It was an incredibly lively protest with home made banners and placards. Many cars passing hooted in support and it was absolutely clear that everyone was there to show support for all Coventry libraries. The demonstrators were, also, absolutely clear that they do not support austerity and cuts to service. The fight against these cuts must and will continue.

The demonstration was, in part, a response to a meeting in Earlsdon that had been advertised entitled ‘delivering communities differently’. The posters for this meeting had a photograph on them of Earlsdon library. They did not give any more details of what the meeting would be about or who the organisers were. The campaign group could only assume from this that ‘delivering communities differently’ meant not through the city council. We have already attended meetings organised by residents associations that have looked at other models, including community volunteer led libraries. We had every intention of attending the meeting on Saturday to debate the issues.

Part of the discussion at the meeting, we have since learned, was to be about social enterprise. York was one of the first local authorities to consider social enterprise for libraries. It’s model means that the library employees partly own and run the libraries. This involves, as the unions in York have rightly warned, significant financial risk being transferred to library staff. Staff, many of whom, work part time on relatively low wages. We don’t as yet know whether this is the preferred model for Coventry because there has been no open and frank consultation of library provision. This is something we would welcome and would be happy to highlight the pitfalls of each privatisation model.

There are further problems with finding individual solutions for Coventry libraries. It leaves those less ‘attractive’ completely at risk. Particularly those that serve the poorest areas of the city with the greatest need of library provision. 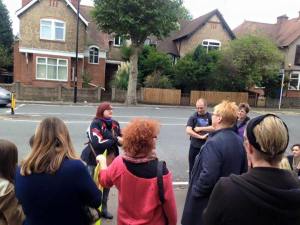 Nicky Downes, Chair of Save Coventry Libraries, speaking at the protest

We have seen in this city, recent investment in roads and new council buildings. But why aren’t the council seeking long term investment in libraries? Investment that doesn’t involve handing them over to private companies, institutions or individuals? Investment that means they are fit for purpose with the best up to date facilities. Investment perhaps from Coventry based firms that wish to support but not take over the libraries. Why is privatisation seen as the only solution?

It’s absolutely clear that libraries are essential to so many people, but particularly the poorest families and individuals in Coventry. Many people in Coventry and certainly at the protest yesterday can talk about why the library is important to them. It’s, also, clear that the libraries are offering far more services than books. Over the past year we know that the city council has been shocked by the level of support for the libraries and the level of anger when the question of privatisation in any of its forms is raised. This is why we won a year’s reprieve. The city councillors should now be open and honest about what the plans are for the city’s libraries. There should be no more meetings behind closed doors or with unspecific agendas. As one protestor echoed yesterday ‘once we hand the libraries over, they will be gone and we won’t get them back!’ This cannot happen which is why we will keep fighting to save every library. 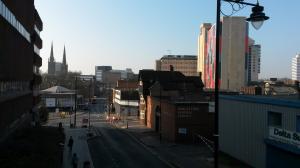 Figures reported by the Coventry Telegraph today have exposed the extent of low pay in our city.

The report showed that according to government figures around 26,000 people, or nearly 1 in 5 of those in work in 2014, were earning less than the living wage of £7.65 per hour.

Low pay, linked to the proliferation of zero hour contracts and casualised work combined with the recent and future job losses will further exacerbate growing inequality in the city. Tory cuts to tax credits will drag ever more people in to the race to the bottom.

Or is it a top ten city for businesses wanting to make more profit on the back of a low wage workforce who do not know when they working from one week to the next?

We have outlined previously an alternative for Coventry, and what councillors could be doing to lead a fight back in the city. We would encourage people to look at this by clicking here

The situation is only going to get worse as the Council add to over 1,000 people it has already made redundant in the last 5 years with further massive cuts expected to take place in the near future.

It is a far cry from the not so distant past in Coventry. Coventry had one of the highest wage rates in the country. The need to rebuild trade union organisation across the city is paramount. Companies and organisations can’t be allowed to get away with poverty pay and the use of zero hour contracts.

This isn’t just a Coventry problem. Across the country and indeed the world there is a race to the bottom as companies and governments of the 1 per cent attempt to make ordinary people pay for the capitalist economic crisis. The logic of the system is to drive down wages as well the workplace rights of working class people to make more profit. This needs to be challenged – we need a massive fight for a £10 per hour minimum wage, decent and secure jobs and housing for all. This should be linked to the fight to get rid of this crisis ridden capitalist system. If you agree with us, we encourage you to join us