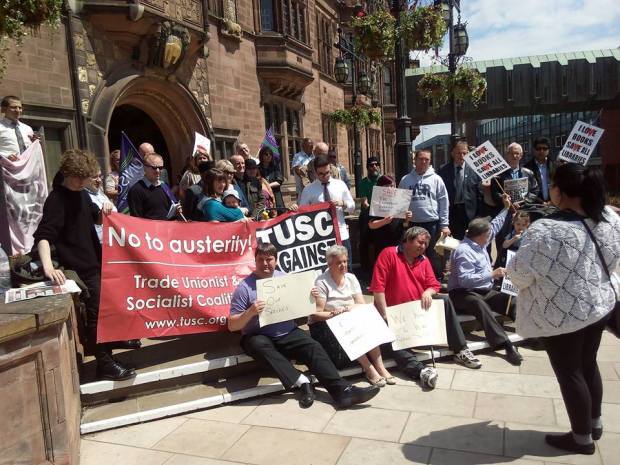 One of the protests against cuts earlier in 2015

Coventry Socialist Party would like to send Xmas greetings to all members and supporters in what has been a busy 2015. We would like to thank all those who have helped us during the year, whether you were one of the thousands of people who voted for us in the Local or General elections in May, donated to our fighting fund, supported one of our many campaigns or who helped in any other way.

It has been another challenging year for working class people as capitalist austerity continues to hit ordinary people here in Coventry, across the UK and all over the world.

However 2015 has seen alternatives to austerity and the idea of fighting back become more prominent. The election of Jeremy Corbyn as Labour leader, the rise of PODEMOS in Spain and Bernie Sanders in the US shows there is an appetite for anti-corporate policies and anti-establishment movements.  Not only that, the re-election of Socialist Alternative member Kshama Sawant in Seattle shows there is a growing mood not just for anti-corporate politics but for bold socialist policies to challenge capitalism.  Read this Guardian article where Kshama explains why Socialism is becoming more popular

2016 in Coventry will see continued and deeper threats to our jobs and services. The Socialist Party will be part of the campaigns to defend our services and communities, whilst putting forward the need for a socialist alternative to end the nightmare of capitalism.

Help us build the forces of Marxism by donating to our fighting fund or by joining the struggle for Socialism!