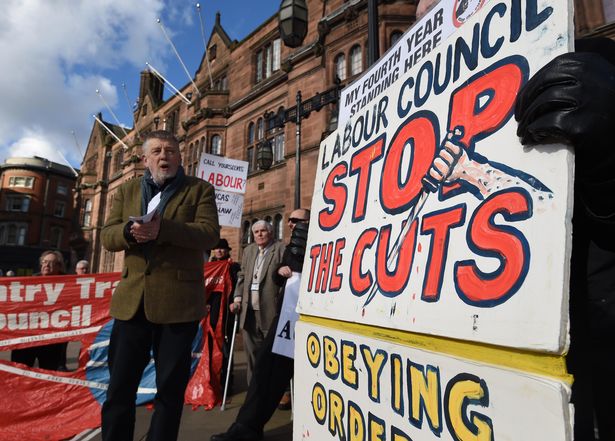 Protesters from trade unions, community groups and anti-cuts campaigners held a lobby of Coventry Council to protest against the budget passed yesterday.

UNISON Branch Secretary Sarah Feeney spoke and called on the council to use the £84million they have in reserves – a sum which they have increased by £3.5million in the last 12 months – to fund services and build a campaign against the cuts.

Dave Nellist spoke representing Coventry Against the Cuts and called on council workers to take action to defend their jobs – and their terms and conditions, which are also being threatened by the council – and echoed the call for the council to fight the cuts. “By the end of this Parliament 80p in every £1 of this city’s budget will have been robbed by the Tories in London, so that bankers can have the same Christmas bonuses this year as they did in the year they caused the financial crash.” 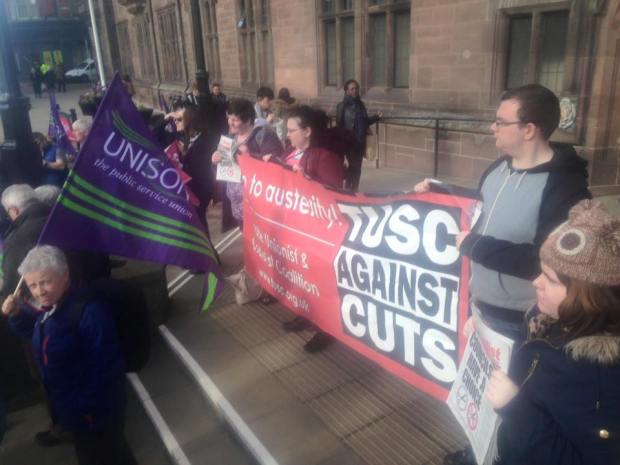 Local Labour Cllr Pervez Akhtar then spoke and said that Labour councillors are “at pains” because of the cuts, but said they had no choice and they would not set an illegal budget. While it is welcome that Cllr Akhtar came and spoke – other councillors have not done so – he unfortunately misrepresented the position advocated by the groups assembled. We are not calling for an illegal budget to be set, we are calling for the council to pass a legal no-cuts budget by using the money they have in reserves. Of course Labour councillors do not want to make cuts – and we want to work with them to fight the Tories, rather than fighting them while they pass on Tory cuts.

These cuts will mean more job losses, play centres being closed, libraries opening hours reduced and council workers terms and conditions being threatened. We need to fight back.