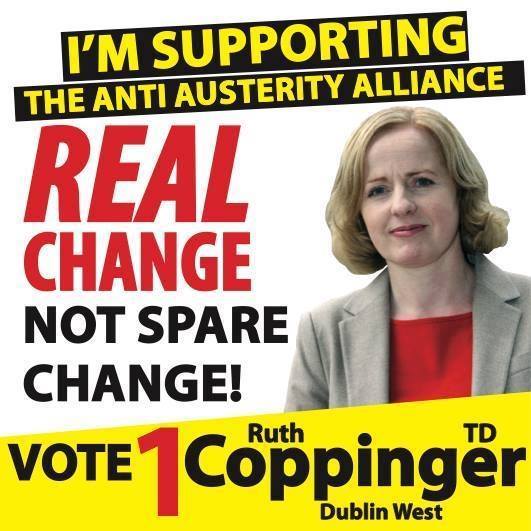 Ruth Coppinger was re-elected as a TD for Dublin West

Coventry Socialist Party send warm congratulations and solidarity to socialist and anti austerity campaigners in Ireland who have made fantastic gains in the General Election.

Though it has been completely ignored so far by news outlets such as the BBC, the Left has performed extremely well.

We are extremely proud to announce that the Socialist Party in Ireland, as part of the Anti Austerity Alliance (AAA) has won a fantastic 3 TDs (MPs) in the Dail (Irish Parliament). Paul Murphy and Ruth Coppinger were re-elected in Dublin and in a superb breakthrough Mick Barry was elected in Cork.  In Dublin West Ruth came second (it is a multi member constituency) with Joan Burton of the Labour Party only just scraping in to fourth place.

Over 100 people in Coventry heard Ruth speak at our election rally for TUSC last year and was warmly received by all of those who attended.

We would also like to pay tribute to comrade Joe Higgins, who has visited Coventry in recent years to support our election campaigns here. Joe stood down at this election and his record as a Marxist in the Irish and Euro Parliament fighting for the rights and interests of working class people is unsurpassed.

The AAA also ran strong campaigns in many other areas such as Limerick, where we only narrowly lost out on more MPs. The People Before Profit Alliance which ran on a joint ticket with the AAA has also won at least 2 seats.

What these election results show is that pro-establishment, business as usual, pro capitalist politics is in crisis. It also shows that Socialist and anti austerity ideas, backed up with decades of campaigning and organising in the interests of ordinary people can win support.

We are proud of the role that our brothers and sisters in the Socialist Party in Ireland are playing and the results this weekend. Moreover, with our comrades organised in the Committee for a Workers’ International in 50 countries across the world, we look forward with confidence to stepping up the fight for socialist policies in answer to the capitalist crisis.

We encourage you to join our international movement for socialist change!

Fill in the form below to get involved