Why I’m standing for TUSC in Bablake 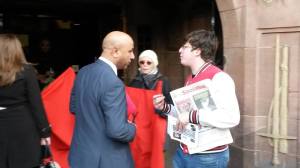 Dan Crowter is our candidate in Bablake ward. Here he explains why he is standing in the local election on Thursday 5th May. Dan is 23, works in a call centre and is a member of the UNITE trade union.

I stood as a Socialist candidate in Bablake ward last year to put forward a socialist, anti-austerity alternative in that election. At that time Labour were running candidates in elections across the country,  putting forward plans for deep cuts in services that were as bad as Tory plans. The Labour candidate last year, David Kershaw, represents everything wrong with the right wing of Labour – a man who has proposed closing libraries and cutting school transport for disabled children!

This year, though, Jeremy Corbyn is leading the Labour Party, and has said he opposes austerity measures. With that in mind, we wrote to every Labour candidate in the city asking them to meet with us to discuss how we can fight the cuts together – as we have done previously. Unfortunately none of them were willing to discuss with us.

I think people in Coventry deserve Councillors who’ll stand up for them, rather than cutting their services.

The Tory cuts planned in Coventry will devastate services – and we need to fight them. That’s why I’m standing for the Trade Unionist and Socialist Coalition as an anti-cuts candidate.