Thank you for voting for TUSC! 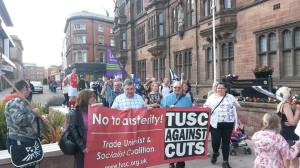 Coventry Socialist Party and the Trade Unionist and Socialist Coalition would like to thank everyone who supported us in the local elections on Thursday. We won 3108 votes across the city. We would also like to thank all party members and supporters who campaigned for us, and the many people who helped us by leafleting, nominating our candidates, putting up posters, donating towards our election costs and much more.

There will be more detailed analysis to come, however what is clear is that we have increased our city wide vote by 25 per cent from the last set of comparable local elections in 2014 (2015 local elections were combined with the general election), where we received 2471 votes in Coventry.

We will post more detailed analysis in the coming days and weeks of the both the situation in Coventry and nationwide. To discuss the outcome of the elections and how we build the fight against austerity we have a public meeting on Thursday 12th May, 7.30pm, Methodist Central Hall, City Centre. The Facebook event is here

Are you one of the 3108 Socialist voters? If so we urge you to consider strengthening the anti-austerity and socialist voice by joining the Socialist Party. Please fill in the form below, and we will be in touch!