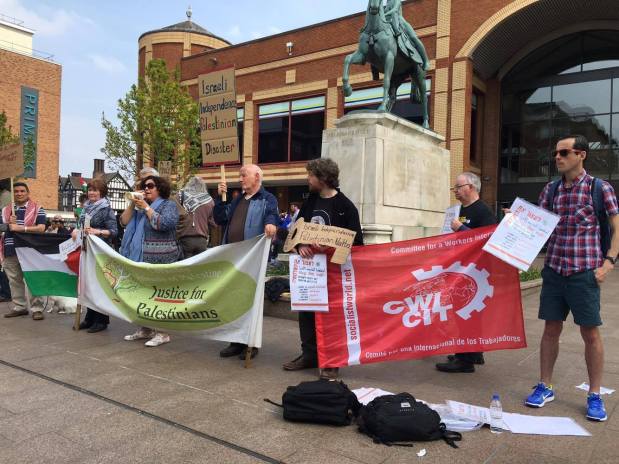 Saturday afternoon saw  Coventry people come together to take part in a flash mob organised by Coventry Friends of Palestine, to commemorate the Nakba. The Nakba, or catastrophe, refers to the forced displacement and exile of the Palestinian people from their land following the creation of the state of Israel.

The event was part of week of action taking place across the UK and further afield, starting on Saturday 7th May and culminating on 15th May, the day on which the Palestinians officially commemorate.

Members of Coventry Socialist Party supported this event, carrying the red banner of our international organisation, the Committee for a Workers’ International (CWI) and holding placards in English, Arabic and Hebrew of the Socialist Struggle Movement, our sister organisation in Israel-Palestine. We also distributed our Israel Palestine Bulletin which details the work of the CWI in the region.

With speeches, brilliant music and leaflets being distributed, the event made sure that the ongoing struggle of the Palestinian people does not go unrecognised. The establishment media and political parties are silent on this issue – therefore it falls to ordinary people across the world to build a movement in solidarity with the oppressed of the Middle East.

Coventry has a proud history of solidarity with the Palestinians, with big demonstrations organised against the attacks on Gaza, and ongoing events and actions to deepen that solidarity.

With the increase in settlement building in the West Bank and the blockade of Gaza by the governments of Israel and Egypt, that solidarity will become even more vital and necessary. Coventry Socialist Party looks forward to continuing the solidarity and putting forward a programme and policies that we think can end the cycle of violence in the Middle East.

We are pleased to share this document from Socialist Struggle in Israel-Palestine that looks at the current situation, and also at our online resources page on this website

If you are interested in getting in touch and finding out more, please fill in the form below