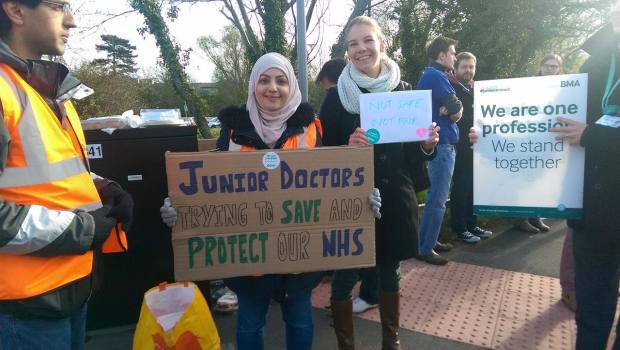 The union representing junior doctors has just announced a new plan of industrial action. The British Medical Association (BMA) will go on strike against the imposition of the new contract initially for 5 days, beginning on Monday 12th September to Friday 16th September between 8am and 5pm.

The Socialist Party and the Trade Unionist and Socialist Coalition fully supports the junior doctors in their campaign to defend their terms and conditions and the NHS itself.

It is now a critical task that they receive the maximum support of the entire trade union movement. The TUC will hold it’s annual conference in Brighton and it needs to be turned in to a council of war with the aim of building co-ordinated industrial action linking up the many different disputes in the public and private sector to defeat the capitalist austerity agenda of the Tories.

The National Shop Stewards Network (NSSN) will be holding a public rally at TUC conference where the speakers will include Shadow Chancellor John McDonnell, Ronnie Draper of the BFAWU and many more and will be discussing how we build support for the junior doctors and the opposition to the Tories.