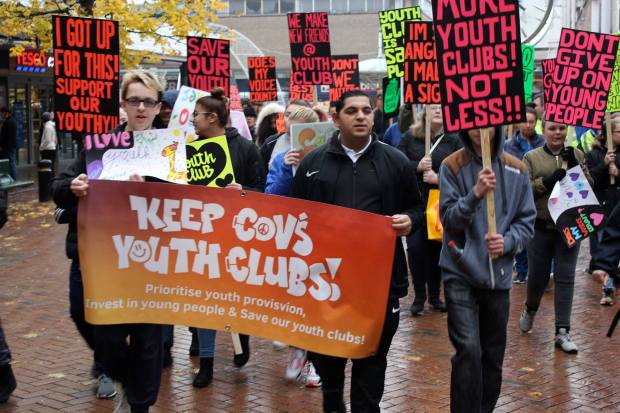 ‘Keep Cov’s youth clubs!’ On the march through the city centre

Despite miserable weather the march won both the attention and support of shoppers as it made it’s way twice through the city of Coventry. The well made and bright placards explained the situation with slogans such as ‘Don’t give up on young people’, ‘More youth clubs, not less!’and ‘We make new friends at youth club’.

If the Council get away with closing these youth clubs it would be yet another hammer blow for ordinary people in the city with libraries and nursery provision also threatened with being cut under the banner of the ‘Connecting Communities’ cuts programme (it would be more accurate to call it ‘Dis-Connecting Communities’). And all of this takes place as the Council makes a bid for Coventry to become the City of Culture!

Photos of the protest can be viewed here

All Coventry people need to get behind the young people and their supporters campaigning to save their services. The youth are leading the way in fighting back and we need everyone to do the same.

The Socialist Party in Coventry are proud to support this campaign like we have done others in the city against the cuts.

Please see the article below which is the text of a leaflet we have produced against Connecting Communities and how we think the Labour Council should be fighting the government cuts, not implementing them.

‘Connecting Communities’ Stop the latest cuts from the City Council

Councillors should fight austerity – not implement it

Coventry City Council is ‘consulting’ on proposals that will have a devastating impact on Coventry people, and change the nature of vital public services including public libraries, youth work and nursery provision, children’s and youth centres.

The Council wants to get rid of paid staff in the libraries and replace them with volunteers who will work for free. Doesn’t this sound a bit like the ‘Big Society’ of David Cameron and the Tories. Unfortunately it is being introduced by a Labour council here in Coventry.

Last year the council ‘consulted’ over plans to cut £1.2m from libraries and play centres. Despite dozens of meetings the Council largely ignored the opposition and went ahead with closing play centres on Eagle Street and Edgewick, cutting spending on library books and DVDs, and reducing library staff and opening hours. Now they’re coming back for more!

Right-wing Labour want 3x as much in cuts to libraries, nurseries, youth clubs and community centres next year – £3.8m!

And to rub salt into the wound, whilst the council is again organising meetings to ‘listen to people’s views’, at the very same time it had set up a fund, over £1/2m, to give grants to those who want to take over services under threat.

Jeremy Corbyn has just been re-elected as Labour leader on an anti-austerity platform. However Labour councils like here in Coventry, or in Durham and Derby where they are attacking low paid education workers, are undermining his anti-austerity message.

It’s true the Tories have slashed the amount of money provided to our city. Their only concern is to protest the bankers and the 1%. However Labour locally could be opposing these cuts. For example:

Unfortunately our Council has done neither of these. Not one Labour Councillor has voted against any of the proposed cuts packages. We need councillors that will fight these cuts and stand up for our communities. At the same time we need build a movement that can challenge capitalist austerity and lead a fight for a socialist system which can guarantee our public services and put the interests of working class people before private profit.