3 years on from the J10 strike 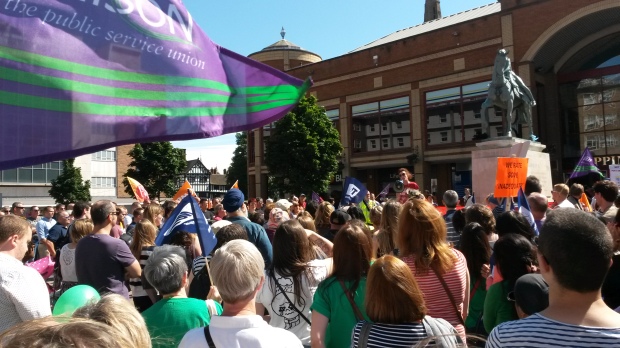 Today marks 3 years since public sector workers in Coventry and across the country took action against pay cuts, attacks on pensions and in defence of public services. It gave a glimpse of the power of workers from different unions striking together. Here in Coventry the strike was very well supported, with workers being given a boost by Socialist Alternative member Ginger Jentzen who was visiting from the United States. Ginger spoke at a 500 strong rally in Broadgate Square bringing solidarity from American workers and Socialist Alternative in the US.  To see pictures and reports of the picket lines, read our article here.

With the focus being brought back on to public sector pay, trade union members and activists needs to discuss the lessons of previous pay campaigns in order to make sure this time we win a decent pay rise as well as getting rid of the Tories. We encourage readers of this site to have a look at the article by Socialist Party trade union organiser Rob Williams who discusses how we can take the movement forward.

Want to help break the pay cap and get the Tories out? Fill in the form below!