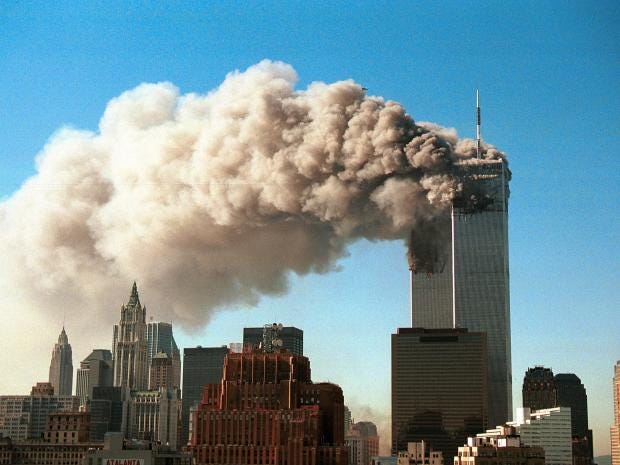 It is now 16 years on from the deadly attacks in the US that killed thousands of people. We are reproducing this Socialist Party statement that was issued on 12 September 2001, the day after what took place.

There is no doubt that the increased US/UK interventions in the Middle East have not made the world a safer place for working class people, neither in the region, in Britain or elsewhere. In fact the opposite is true. We are still faced with the choice – Socialism or Barbarism. Capitalism does not offer a decent future for the majority of the world’s population. It is time for socialist change.

After the carnage in the USA: World Crisis Deepens

THE KILLING of thousands of innocent civilians in New York, Washington and elsewhere in the US has caused horror and revulsion among ordinary working people worldwide.

The suicide tactics of the attackers are condemned and opposed by socialists. Such tactics can never advance the struggles of oppressed nationalities or working-class people anywhere across the globe. In fact the immediate results of such action could be to weaken working-class solidarity as governments in the West whip up the mood for revenge on those who are blamed for carrying out the attacks.

Inevitably, as on 11 September, it will be the workers, the oppressed and dispossessed who pay the price for what the US leaders and commentators describe as an ‘act of war’.

Whilst no group has claimed responsibility as The Socialist goes to press, and Osama bin-Laden is rumoured to have denied involvement, the US government is certainly preparing to revenge these horrific attacks. With leading politicians correctly pointing out that this is a more devastating attack on US imperialism than Pearl Harbour, a US government (particularly one led by Bush) will inevitably have to be seen to do something in the face of such an assault.

The attacks will be seen as huge turning point for world capitalism and will have immense consequences for the world politically and economically, apart from the devastating effect it will have on the lives of tens of thousands of people in the USA and indeed worldwide.

As we go to press share prices have plummeted and the price of oil and gold have increased dramatically – a recognition of the scale of the crisis that international capitalism feels it is facing.

Following Tuesday’s horrendous events there will certainly be an escalation of the Middle East crisis, which is likely to see the US and other imperialist powers more directly involved and could lead to all-out conflict in the region. Unfortunately, it is likely to result in further assassinations and reprisals against the whole Palestinian population on behalf of the imperialist powers.

Israeli premier Ariel Sharon has indicated that he sees this as a green light to intensify action against the Palestinian masses and he will draw on US support – either directly or indirectly – to carry out wider repression in the region.

Inevitably in the immediate aftermath, large sections of US workers will temporarily acquiesce in whatever actions the previously unpopular, reactionary President Bush takes.

And the pandemonium following the scenes of carnage engulfing New York and Washington after Tuesday’s suicide attacks have led to a wider panic about the implications of the strikes.

Immediately following the aircraft crashes into the World Trade Centre and Pentagon – potent symbols of world capitalism’s financial and military might – share prices, which had been falling dramatically in previous days, fell further. The price of oil rose by $2-$3 a barrel reflecting anxieties about increased instability in the Middle East – the likely source of the ‘terrorist’ attack.

The air strikes led to an immediate state of national and international crisis, which will provoke further questioning of the authority of capitalism’s rulers. Government and financial services were paralysed in the USA and stock markets in other advanced capitalist countries dropped dramatically or were suspended following the attacks. Even if capitalism manages to stabilise matters in the short term the medium and long-term effect will be to deepen the underlying economic crisis.

No doubt Bush and Western imperialism will step up their drive against Islamic ‘terrorism’ in retribution. The co-ordinated ‘assault on America’ will lead to co-ordinated US state action to hunt down and get ‘revenge’ against Islamic groups, regardless of whether they were involved or not.

It is also possible that a witch-hunting atmosphere could develop in the United States and elsewhere against Arabs, Muslims or others suspected of associations with terrorist states or groups.

This could also be used against any radical groups that challenge the capitalist system.

Blair found the bombings a convenient way of avoiding criticism of his privatisation plans at the TUC and has immediately used the opportunity to step up security. Whilst many workers will initially accept such measures – as was the case in Britain in the early 1970s with the adoption of the Prevention of Terrorism Act after events in Northern Ireland and Britain – such measures do not stop the threat of such attacks and have been used against those on the Left and the labour movement generally.

President George W Bush’s father, the other President Bush, was the world leader who used a war in the Gulf to assert his ‘New World Order’. That new order ushered in the era of globalisation, which has impoverished and alienated billions.

US imperialism’s dominance of the globe has brought increased instability, tension and turmoil to every corner of the planet. Combined with the absence of a mass movement of the working classes and oppressed, this has led some to pursue extreme and futile methods, such as the suicide tactics which led to the carnage in New York and Washington.

Imperialism’s policies have antagonised millions around the world. US Secretary of State Colin Powell had said in May this year:

“Terrorism is part of the dark side of globalisation. However, sadly, it is part of doing business in the world – business we as Americans are not going to stop doing.”

US and Western leaders talk sanctimoniously about acts of ‘evil’ terrorism but gloss over their own acts of terrorism – military, politically and economically – against oppressed people around the world.

The attacks show that despite all the armoury of the world’s only superpower they are powerless and unable to protect their own citizens in the face of determined suicide attacks. The inability of the imperialist powers to find a settlement to the crisis in the Middle East, combined with the incapacity of the Palestinian leaders to offer a way forward for the Palestinian struggle, has led to increasing use of suicide attacks as a tactic.

Whilst the suicide bombings have struck terror into the heart of Israel and America, they are not capable of bringing forth a successful resolution of the Palestinian conflict. Nor will they deter US and other world leaders from continuing with their policies of state terror and economic exploitation.

Among the lessons that workers internationally will draw from these terrible events is that the imperialists, like Bush and Blair, cannot offer any resolution to the world’s conflicts. But neither can the tactics of the fundamentalist terrorist groups offer a way forward to the long-suffering peoples of the Middle East.

Furthermore, as well as adding to the panic on the already jittery world capitalist markets the events will confirm to large numbers of workers worldwide the instability of the global capitalist system.

At some stage these events could be a further trigger to exacerbate the economic woes of world capitalism.

Capitalism, at its most naked is a system of conflict, civil wars, wars, poverty, starvation and insecurity for the mass of people on this planet. It is the oppressed people of the world – whether workers in America or Palestinian youth – who pay the price of capitalism’s inability to resolve the crises their system creates.

It is the oppressed people of the world who can provide a solution to this era of global crisis by uniting to end the rule of the capitalist system and establish a socialist world where the horrors and insecurity of imperialism’s so-called New World Order are abolished once and for all.