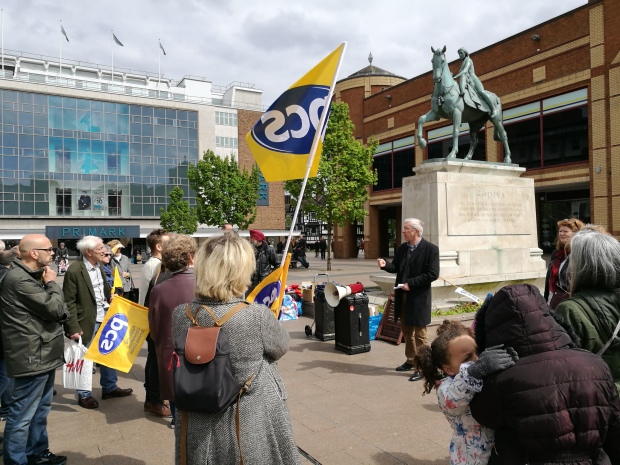 The below article was written by Socialist Party members in the PCS union.

The Department for Work and Pensions (DWP) has ended up doing an about-turn and scrapped plans to outsource some of its core work to Capita.

The original plans would have seen the handling of new claims to Employment and Support Allowance (ESA) being instead done by Capita staff, on a much lower salary.

This would have been disastrous for some of the most vulnerable in society – those unable to work due to sickness or disability – for whom ESA is intended. A high proportion of claimants will have mental health issues.

Capita’s previous failure to process Jobseekers Allowance (JSA) claims on time led to a backlog being built up – which DWP staff then had to go and help clear!

It is near impossible to avoid hearing the flood of horror stories about the private sectors’ handling of medical assessments for benefit claimants. ATOS – now along with both Maximus and Capita – became notorious for the callous way in which its medical assessors would lie about claimants’ conditions in reports, as well as resorting to ‘tricking’ claimants into failing their assessments.

Among the 4,000 submissions of evidence to the Work and Pensions Select Committee on the assessments, such examples were highlighted as suicidal claimants being asked why they had not already tried to kill themselves, and blind or visually impaired claimants reported as being able to walk dogs they didn’t actually have. It even came to light that some assessors would ask claimants “when they caught” Down’s Syndrome!

Nothing else could highlight so starkly the complete failure of the private sector to properly carry out work that should remain in-house.

This u-turn is of course a victory – but given the context against which it is set, it should only be seen as one step in a series of future victories against this weak, crisis-ridden Tory government.

Their list of climbdowns is almost embarrassing – far from any ‘strong and stable’ rule, replicating the ‘Iron Lady’, we have seen multiple u-turns and defeats, mostly brought from the pressure of trade unions and the seething anger amongst many in society.

From having to scrap employment tribunal fees, making benefit phonelines free, and even being forced to slash the amount of university tuition fees, there are more victories to be won if the pressure remains and increases!

The demand that all essential public service work be brought back in-house where it belongs is vital.

Fill in the form below if you are in PCS and want to link up with Socialist Party members.