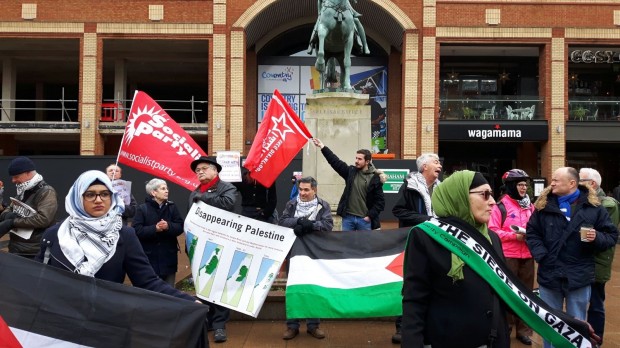 At short notice a protest was called today to show solidarity with Palestinians killed and injured by the Israeli military in Gaza on Friday. You can see more pictures by visiting our Facebook page. The Socialist Party distributed a bulletin which you can download here.

Activists from Palestine, local campaigners, trade unionists and socialists gathered together to ensure that what has taken place did not go unchallenged. Coventry has a long history of showing support for the Palestinian struggle and this will need to be stepped up – the only consistent allies of the Palestinians are ordinary working class people around the world.

The scenes in Gaza have been horrific – at the time of writing at least 16 Palestinians have been killed by bullets fired by the Israeli military, with over 600 injured.

Around 20,000 Palestinians had gathered to commemorate what is known as Land Day, the anniversary of the killing of 6 peaceful Palestinian protestors in 1976 who were taking part in a General Strike against the expropriation of Palestinian land.

Protests are expected to continue for 6 weeks leading up to 15th May – the 70th anniversary of the Naqba (Catastrophe) which saw 750,000 forced to flee from their towns, cities and historic homeland.

The situation in Gaza has continued to deteriorate – 1.9 million Palestinians live in what is in reality the world’s largest open air prison camp – blockaded by land, air and sea by Israel and Egypt. The economy is completely crippled – according to figures from the World Bank, there is 44 per cent unemployment, which rises to 60 per cent for those aged between 15 and 29. Around 80 per cent of people rely on humanitarian aid to survive whilst a staggering 97 per cent of water is not safe for human consumption. Israel controls all movement of goods and people, to and from Gaza. The United Nations has stated that Gaza may not be fit for human habitation within a few years.

In this latest outrage, the Israeli army revealed its deadly intention in dealing with the protest by positioning 100 snipers along the border fence. The Israeli ruling class fear the potential of the mass nature of these protests, hence why they were determined to use such lethal force. They cynically use any Palestinian protest to point to how this allegedly threatens the security of the Israeli population – in reality it is the racist policies of the Israeli government, the occupation and the ongoing oppression of the Palestinians that is the biggest threat to the safety of ordinary Israelis.

Sadly, the latest massacre is not a new occurrence for Palestinians in Gaza. Thousands have been killed and many more wounded by numerous Israeli attacks. Responses to these murderous attacks have ranged from very mild condemnation from the Western powers and institutions, to outright support for the actions of the Israeli government and military.

Further protests around the world  will take place in the coming weeks. The establishment, including the right wing in the Labour Party who discovered their previously never seen before ‘anti-racist’ conscience for about 30 minutes last week, will be silent towards the suffering of the Palestinian masses. It will require the active solidarity of ordinary people, including the hundreds of thousands of Jeremy Corbyn supporters in this country, to ensure the Palestinians are not isolated.

The Socialist Party commits its solidarity to the struggle. At the same time, pointing out with our co-thinkers in the Socialist Struggle Movement in Israel-Palestine, that we need to build a mass movement for socialist change here and in the Middle East; to end the siege of Gaza, the occupation and to build a society that ends all racism and oppression and where national rights and self-determination are guaranteed for all.

If you agree with us, fill in the form below to get active in the struggle for socialism