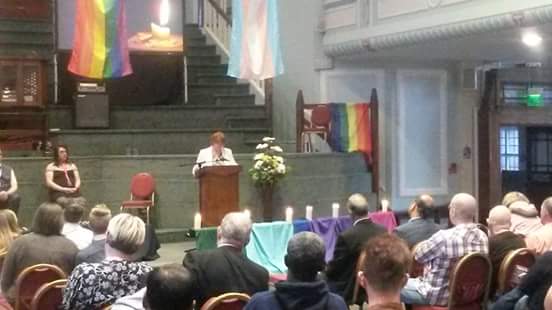 Coventry Socialist Party members at an LGBT vigil in 2016

On Tuesday 20th November thousands of people across the world come together to commemorate Transgender Day of Remembrance.

Trans Day of Remembrance is a day to remember those who have been murdered due to anti-transgender hatred, as well as trans people who have committed suicide, and to recognise the oppression and suffering so many trans people face.

One such event was held in Coventry, and members of Coventry Socialist Party attended to pay our respects.

In the evening around 50 people gathered in a hall in an event organised by the local Pride group.

The event began with speeches, personal stories, and poems. From the start it was clear that this is a community not just saddened but deeply infuriated by the hatred they have collectively endured.

Many of the speakers called for urgent change in an unjust world, criticising governments across the world for failing to protect them.

Socialist Party members spoke at this vigil as members of the trans community and as trade unionists.

We emphasised that the capitalist system we live under has caused the suffering and deaths of many trans people. Under capitalism they are left homeless when they could be housed, suffering mental illness when they could and should be helped, desperate when they need not be, and so often commit suicide or are forced into the dangerous situations that lead to their murders because of a system that deprives them of the chance to live.

We gave an idea of how to fight this, stating the vital role trade unions play now and the real potential they have to defend and fight for trans people alongside all of the working class, linked to the struggle for the socialist transformation of society.

These messages were well received by a community that has been at the forefront of right-wing attacks and austerity cuts in recent years and has been subject to such horrific treatment for far too long.

This was all too clear when the names were read out of the three hundred and twelve recorded murders in the last year. Each name was read out, with their age, and where and how they died.

Many were in Brazil, where the far-right proud homophobe Bolsonaro has just been elected president.

Many were also in the USA, where Trump has sought to erode the rights of trans people, and plenty of Republicans express hatred for them.

The rights, protection, and ultimately the liberation of transgender people cannot be obtained without fighting for revolutionary change across the world.

In this, the working class must be united in our collective goals for healthcare, for safe communities, for rights not limited by reactionary ideas or by greed.

If you agree with what we say on this, please get in touch with the form below!