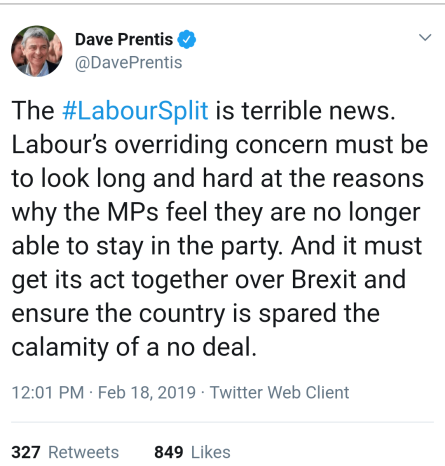 We have received the following short article from a UNISON member in Coventry concerning the comments of union general secretary Dave Prentis about the 7 MPs who have resigned today from the Labour Party. We also refer readers to the latest editorial from our newspaper The Socialist.

The news that 7 Labour MPs today walked away from the Labour Party has been met with a mixture of laughter and anger from many trade unionists who want to see an end to this Tory government. Laughter, because the 7 seem to take their claims seriously that Labour (and by extension the trade unions) have somehow become a hotbed of ‘anti-semitism’ ‘bullying’ and ‘abuse’. It should be said that this laughter has increased even further with one of the 7, Angela Smith, making a disgusting comment on live TV regarding people of ‘funny tinge’. How can anyone take their supposed anti racist credentials seriously?  But also anger, because at the same time as working class people are struggling to get by, that workers face more pressure at work due to austerity and have to rely on foodbanks, these so called public representatives are doing everything they can to undermine the chances of a government that may act in the interests of working people.

It is in this context that the general secretary of our union, Dave Prentis, has taken to Twitter to attack the left wing leadership of the party. Once again Prentis shows his true colours with regard to what he thinks of Jeremy Corbyn and anti austerity policies in general. Rather than call the 7 what they are – traitors acting in the interests of the Establishment in order to undermine a potential Labour government, he attempts to lay the blame everywhere other than at the door of the MPs that have resigned.

The only ‘terrible news’ concerning them leaving the Labour Party is that they had not been removed by the democratic mechanism of mandatory reselection, and replaced with socialist fighters who would act in the interests of working class people.

Dave Prentis has once again shown what side he is on. It is high time we had a general secretary and union leadership prepared to fight for our members who have suffered year on year from austerity cuts.