We would like to thank the 101 people people that voted for Jane Nellist – our Socialist Alternative  candidate in Thursdays Upper Stoke by election in what was clearly extremely difficult circumstances.

We received over 8% of the vote, which we believe is a strong base to build further the resistance to austerity continuity carried on by this Labour Council in Coventry. 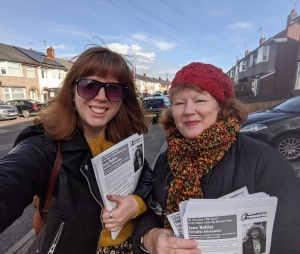 As expected the Labour Party retained the seat. However for socialists that is not the end of campaigning, we will be out again from today fighting in anyway we can in the interests of ordinary working people and for a socialist change of society.

We say that the Labour council simply can’t carry on as it has been doing.

2000+ council jobs have been lost since 2010. The city is meant to be next years city of culture yet is more like a city of Homelessness, high rents & dodgy landlords, with most Sure-start, libraries, youth clubs – wound down or closed

(Here’s what we said in our election campaign https://coventrysocialists.com/2020/03/09/vote-jane-nellist-in-the-upper-stoke-by-election-we-need-a-socialist-councillor-in-coventry/)

The Coronavirus pandemic will dominate many people’s thoughts and it reveals the capitalist system in crisis and its complete Inability to protect ordinary people across the globe.

We have produced a charter of demands needed to protect working people https://www.socialistparty.org.uk/partydoc/Coronavirus_-_a_workers_charter_2020

From an NHS underprepared after a decade of austerity, to a lack of testing for the virus, to jobs and wages under threat and to production systems and food supplies inadequate for this event because of ‘just in time’ methods, that earn big firms small profit increases, but which crumble in the face of anything unusual.

This will rightly lead to a huge questioning of the economic system as the threat of the virus fades. People should remember that we were told there was no magic money tree and public ownership was bad, yet now we see £trillions found and governments forced to intervene where the market is failing.

Austerity was a fraud, and even Boris Johnson was forced to say on Thursday that ‘while people think the bail out in 2007-8 was mainly for the bankers and not the people, this time we will look after the people’. This shows how scared they are of movements against their system further down the line.

Councils across Britain could also do so much more  https://www.socialistparty.org.uk/articles/30435/18-03-2020/councils-must-break-austerity-rules

Finally we appeal to anyone angered by the current crisis to think about getting involved – it’s easy to!

It’s had become clearer than ever that it is working people that are needed to keep society afloat – cleaners, delivery drivers, metalworkers, doctors and all the rest of us. However, we can do without the capitalist who just puts the barrier of profit in the way of what needs to be done.

Help us fight for the drastic socialist change needed to protect the millions not millionaires! – join the