CHECK OUT OUT OUR WORKERS CHARTER

AND SEE ALL OUR COVERAGE AND ANALYSIS OF THE CORONAVIRUS CRISIS IN ONE PLACE!

Below we have 2 items that reveal:

1) That the “terrifying” results from a major pandemic exercise were kept secret from the public. (Sunday Telegraph)

“The Telegraph reported exclusively that Britain had undertaken a major pandemic-readiness test, known as Exercise Cygnus, three years ago and that the NHS failed to pass it. Yet, the “terrifying” results of Cygnus were kept secret from the public. 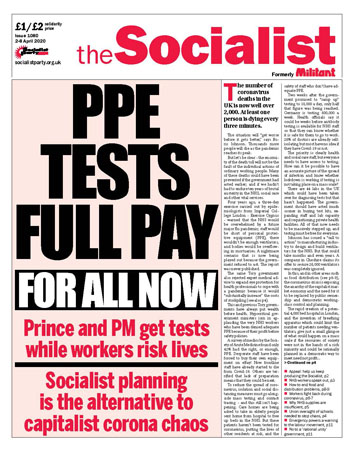 “They had a duty to immediately put the NHS and British public on high alert. February should have been used to expand coronavirus testing capacity, ensure the distribution of WHO-approved PPE, and establish training programmes and guidelines to protect NHS staff. They didn’t take any of those actions. The result has been chaos and panic across the NHS. Patients will die unnecessarily. NHS staff will die unnecessarily. It is, indeed, as one health worker wrote last week, “a national scandal”. The gravity of that scandal has yet to be understood.”

“Government documents show no planning for ventilators in the event of a pandemic” “ventilators, which are now in such high demand that Matthew Hancock, the Health Secretary, told British manufacturers on 14 March, “If you produce a ventilator, we will buy it. No number [you produce] is too high.” He urged firms from Rolls-Royce to JCB to stop what they do and to begin making ventilators”

As with the late and inadequate supply of PPE for frontline health and care workers and GPs, the non-appearance of rapid testing, tracking and confining suspected cases, which is the WHO guidance (and the successful policy of countries, such as Korea), so we also have a shortage of ventilators. This need not have happened, had there been planning and investment in good time. This was explained in The New Statesman (16 March) edited excerpts below.

“After failing to prepare, the UK now faces a grave shortage of the machines that will keep critical patients alive.

In October 2016 the UK government ran a national pandemic flu exercise codenamed Exercise Cygnus. The then chief medical officer Sally Davies commented “We’ve just had in the UK a three-day exercise on flu, on a pandemic that killed a lot of people” “It became clear that we could not cope with the excess bodies,” One conclusion was that Britain, as Davies put it, faced the threat of “inadequate ventilation” in a future pandemic.

Despite the severe failings exposed by Exercise Cygnus, the government’s planning for a future pandemic did not change… ..the plans were tested and failed, yet not rewritten or revised. …none of them mentioned ventilators, which are now in such high demand

Hancock’s entreaty to manufacturers was the first time the government has publicly recognised Britain’s urgent need for more ventilators – six weeks after the first cases of coronavirus were reported in the UK on 31 January. But the necessity for the devices in any pandemic has long been clear.

As the 2011 preparedness strategy puts it, “Critical care services… are likely to see increases in demand during even a mild influenza pandemic. In a moderate or severe influenza pandemic demand may outstrip supply, even when capacity is maximised… it may become necessary to make decisions concerning priority of access to some services.”

Pre-existing pandemic plans, an official is quoted as saying, “never went into the operational detail”. Britain now faces a grave shortage of the machines that will keep critical patients alive.

In summary the figures go like this: The government expects between 60–80% of the population to contract coronavirus, or between 40-53 million people; that 4% of cases will require hospitalisation; modelling also assumes that a quarter of those hospitalised will need a ventilator; In short, at least 1% of all cases can be expected to need ventilation, or between 400,000 and 530,000 people

Government said that it expects 95% of all cases to occur over a 9-week period, with 50% coming during a 3-week peak. During the peak, –expected to arrive in Britain in late May or June- (that’s why recent talk of a lock down for 3 months has arisen) 15 to 20% of all coronavirus cases will hit the NHS every week for three weeks. Assuming only a 1% rate, rather than the higher rate in Imperial’s modelling, the number of patients needing a ventilator would therefore range from 60,000 per week to more than 100,000.

The United Kingdom has 5,000 ventilators. Many are sure to already be in use, as ventilators are deployed with intensive care beds, and Britain’s intensive care beds run at 70 to 80% capacity most months. Each ventilator will typically be required for at least ten days, making the gap between demand and supply more acute over time.

There are fears for people in America because of the lack of an all embracing health service and the inability of people of lesser means to be able to access it. It has led to a joke going round the USA: “For the average American, the best way to tell if you have CoVid19 is to cough in a rich persons face and wait for their test results.”

Specialist medical companies are claiming that on hearing of the dire shortage of ventilators, they contacted government to offer to provide increased numbers of them, but never even got a response from government. Meanwhile Dyson and JCB have featured in the media as possible suppliers. Coincidental fact: Dyson and JCB are donors to the Tory Party.

Apparently, the EU also invited the UK to join them in successfully procuring large numbers, but the British authorities ‘didn’t notice the e-mail’ and so missed out.

On panic buying and ‘hoarding’. We’ve all heard of behaviour that’s beyond the mark, but people stocking up have come under much media attack. But underlying this behaviour was a fear to fear that people wouldn’t be able to get supplies or be able to go out to get supplies. It was fear based on a lack of confidence in Government advice, or that their words wouldn’t be matched by deeds.

In fact, Supermarkets say they still haven’t heard from government who the vulnerable 1.5 million in Britain are who need help. Also reports are appearing that some people are finding it hard to get out for the supplies they need.

Public money is being used on a massive scale to bail out market failures again, but we want no return to the past when this crisis fades. Health workers, cleaners, shopworkers etc, previously under rewarded must not be turned from Heroes to Zeroes and there must be no dumping the bill on the rest of us. No going back to the lie that there’s no money for us while the billionaires pile up unimaginable fortunes. 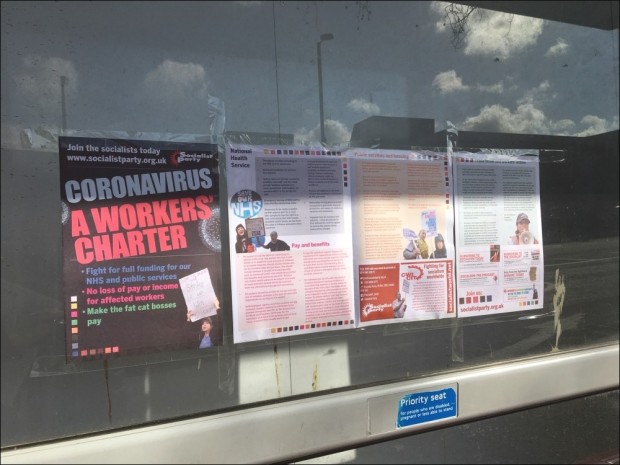 Confusing advice: People walking in the Peak District have drones overhead telling them off, yet planeloads still arrive in London without checks and then go into the tube network – just one piece of confusion that reflects the fact that the government failed to act quickly and clearly enough in dealing with the crisis.

It may appear semantic, but they aren’t building them, they are medically equipping (to what standards we don’t know) giant exhibition centres to be used as field hospitals.

Make no mistake, none of us will care as long as if we get ill we are treated, but again it underlines the lack of preparedness for this crisis that they are constantly trying to bluster-up what they are doing in their desperate rush to catch up. (Perhaps they were all stung by China’s ability to actually build 2 new hospitals in a few days)

Acutely aware that the public have spotted how awfully unprepared Britain (the UK) is for this virus Stevens was keen to point out that they have freed up 33,000 beds.

2 things. It’s unlikely they are Intensive Care beds – and if some were whether they had staff to operate them, and secondly it covers over the fact that denial of treatment is now being enforced for other seriously ill patients.

Lack of capacity in the health service means Covid will cause increased deaths with other illnesses.

A cancer specialist said he expected at least a 5% increase in cancer related deaths because the pressure of Covid would mean cancelled treatments of other serious illnesses. A member of Coventry Socialist Party needing an urgent life-saving operation has had the operation postponed.

It cannot be reassuring news that Birmingham Airport is to become a temporary Mortuary for 12,000!