If thousands of beds can be found for Nightingale hospitals, why couldn’t they be found in the past when the NHS was stretched to breaking point?

When on so many occasions people were forced to wait in ambulances or trolleys?

‘National NHS leaders are to take action over growing fears that the “unintended consequences” of focusing so heavily on tackling covid-19 could do more harm than the virus, HSJ has learned.’

NHS England analysts have been tasked with identifying patients who may not have the virus but may be at risk of significant harm or death because they are missing vital appointments or not attending emergency departments, with both the service and public so focused on covid-19.

A senior NHS source was quoted “There could be some very serious unintended consequences. While there will be a lot of covid-19 fatalities, we could end up losing more ‘years of life’ because of fatalities relating to non-covid-19 health complications.

“What we don’t want to do is take our eye off the ball in terms of all the core business and all the other healthcare issues the NHS normally attends to.”  “People will be developing symptoms of serious but treatable diseases”

Unless urgent action is taken people suffering strokes, or from Cancer, Heart conditions and more could end up as part of a silent death toll. 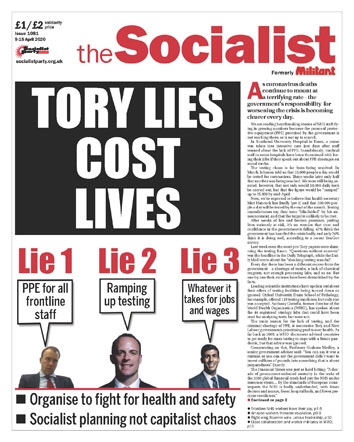 A member comments:   “What does the Catherine Armstrong case tell us?

Scotland’s chief medical officer was the public face of the TV campaign to get people to stay at home and then bobs off to her second home for two weekends!

The lockdown is being largely effective because of the responsible actions of millions of working people and the bravery of others. Yet, every day people are being shamed for being 10 yards apart in a park while the chief medical officer does this!

I’ve met no-one who isn’t shocked at the selfishness and stupidity. And few who aren’t angry at the ‘One rule for us, another rule for them’ mentality.

Doesn’t it echo the MP’s expenses scandal and many similar stories we’ve heard? Where expenses claims were beyond the outrageous. Where Ian Duncan Smith could proclaim ‘the end of something for nothing’ regarding Benefits and at the same time make expenses claims for a hair-cut? (What hair?)

Just how corrupt or out of touch are those who climb the greasy pole to the top of our system?

For a chief medical officer to tell people stuck in flats, often with kids and no gardens to go in, that they must stay at home while not only can she go to her first home’s considerable garden but buggers off to a second home ( – a pre-requisite it seems for our upwardly mobile upper professional class.)

How is it they can feel no pressure from the rest of us to be accountable or even considerate, never mind do their job properly?  Is it the breakdown of social solidarity following the “no such thing as society” mantra of Thatcherism? The mantra that meant MP’s could fiddle their expenses without a tinge of guilt? Or what else could make them feel no connect to others in society, no being bound by the same rules as the ‘rest of us’?

Whatever it is, we must fight to put an end to this hypocritical ‘I’m alright Jack’. There needs to be a huge democratic and accountability shake-up to end a situation where elected and appointed officials feel no connection to we ordinary millions. The ordinary millions without whom nothing would work anyway.

We should ensure that democratic and accountable bodies run our public services. Public representatives like MP’s should get the wage of an average skilled worker not way more. Stop the gravy train where people stand to be reps to fill their pockets instead of fighting to improve conditions for all. Then they can rise with the rest of us.”

Reports are emerging that MP’s are to get an extra £10,000 to work from home. This can’t be true, someone tell us it’s fake news….

Hypocrisy as Tories lecture us on selfishness and Branson seeks a bail out.

After years of telling us ‘there’s no such thing as society’, that we’ve ‘all got to look after number 1’, and of MP’s feeding in the trough and of taking lucrative executive positions in private companies, it’s a bit rich of Tory ministers to tell people not to be selfish!

And while they pick on predominantly working class footballers, demanding a pay cut, they don’t talk about the billionaires and super rich in society. Indeed one of them, Mr Branson is appealing for a public bailout for his company despite having a personal fortune that could cover those financial issues many times over.

And, while there’s talk of hoarding…What about £13 trillion hoarded in tax havens around the world? Money that could be used to improve economies and peoples’ lives across the world.

👉 If you agree, join us: https://www.socialistparty.org.uk/main/join