Thanks to Tory austerity passed on by the Labour council, Coventry’s libraries have faced closures, staff cuts, opening time cuts, funding cuts. Earlsdon library is one that had its funding cut, and Socialist Party members were part of the protests battling for it to remain open and fully funded.

So. I’m quite surprised by the audacity of Labour’s Earlsdon leaflet, calling the library a ‘vital resource’ which has ‘done our community proud’.

I agree entirely, I just… wonder why a vital resource was subject to cuts and repeatedly had its future threatened over the past few years, by Labour?

The leaflet continues “Your local Labour team is focused on supporting the trustees”. Let’s remind Coventry Labour councillors of their record.

To quote from Coventry Telegraph directly: “In 2016 Coventry Council had given Earlsdon residents the option of running their own library voluntarily, or seeing it permanently shut” [read the article yourself here]

Then in July 2018 [yes less than three years ago!] the library nearly closed because the council demanded the former trustees cough up to lease the building back from the council! Even when a new group of volunteers got an agreement to keep things going, the article points out the severe lack of staffing and limited opening hours.

Sarah Smith, co-founder & full-time campaigner for Save Coventry Libraries, is TUSC candidate for Woodlands Ward for the 3rd time and has said the following:

“In January 2015, Coventry city council announced they were going to close every Library in Coventry.

When Earlsdon library was handed over to volunteers, it was closed continually for about a year, when it did open it was only open a few hours on a weekday, also lacked stock. The government nor local Council have done research into the impact or sustainability of Libraries run by volunteers/ community groups. As a Campaigner I have conducted my own research & found the average lifespan of a volunteer/community group led Libraries are around 18 months.

Of course some break the model but almost all are closed for long periods, lack stock & have safeguarding concerns for example the volunteers having to work alone & have to wear a rape alarm. Save Coventry Libraries will campaign not only save Libraries but its Librarians.”

Its bare-faced hypocrisy from the council.

Lets put it simply – Coventry Labour council doesn’t really care about Earlsdon library. Or any of the libraries they’ve slashed funding to while keeping tens of millions of pounds in reserves and doing nothing to oppose the cuts from central government.

That’s exactly why anti-cuts campaigners are standing in the May council election under the TUSC banner.

There might not be any major cuts this year, but the council refuses to reverse the damage that has been done. And won’t do anything to prevent more cuts.

We don’t need empty platitudes and already-broken promises for our public services, we need political action to push back the decade of cruel austerity.

As our election leaflet says:

“This election is a chance to elect councillors who’ll take the fight to the Tories and bosses.

Falsely, Labour councils pretend they have no choice but to make cuts demanded by government.

Unlike Tory-lite Labour councillors, socialist councillors will resist austerity rather than pass on cuts.

We’d be a voice for local people against austerity, greedy landlords, privatisation and closures.

If councils put up a fight, setting no cuts budgets, they could force yet another Tory U-turn and win the funding our communities desperately need.

Working people need a voice, a party of our own. The Socialist Party is part of the Trade Unionist & Socialist Coalition (TUSC) set up to enable trade unionists, community campaigners and socialists to stand together against the pro-austerity establishment parties. It is a beginning – a step towards the kind of party we need to deliver a socialist alternative to austerity.“

We have been sent the following article by Save Coventry Libraries campaigner Sarah Smith.

Cheylesmore Library will be closing on 10/8/2017.  Okay, so it’s earmarked to be re-opening as a community run Library on 4th September; why all the fuss you ask?

First of all, that is a whole three weeks and four days that a community will be without a library; just when it needs it the most, due to it being the summer holidays.

Not only do they give up the responsibility to run these libraries, but they also give up responsibility for the safety of you. These volunteers are not CRB checked.  They will not be trained to deal with medical or other emergencies that occur, such as safe guarding issues, etc.

They are not even obliged to even open up the library as in if volunteers don’t turn up to open it then the library just doesn’t open.

Council’s across the country do not have to impose the cut backs imposed by central government, they could spend reserves and form a campaign against central government for more money; better still, they could say no, if they wanted to and if our local councillors & MP’s refuse to do this, then maybe it’s time to elect those who will stand up for the people of Coventry.

Join the protest outside Cheylesmore Library on Thursday August 10th at 6pm!

On Monday anti-cuts campaigners handed in petitions with over 2800 signatures against library and youth service closures.

Sarah Smith from Save Coventry Libraries said “This is a further sign of the massive opposition throughout Coventry to the council’s cuts agenda.”

Coventry Council say they have to make cuts, but they don’t – they could use the £95million+ that they have in reserves to fund services to hold the line and buy time to build a campaign to get back the money that the Government has stolen from the people of Coventry. 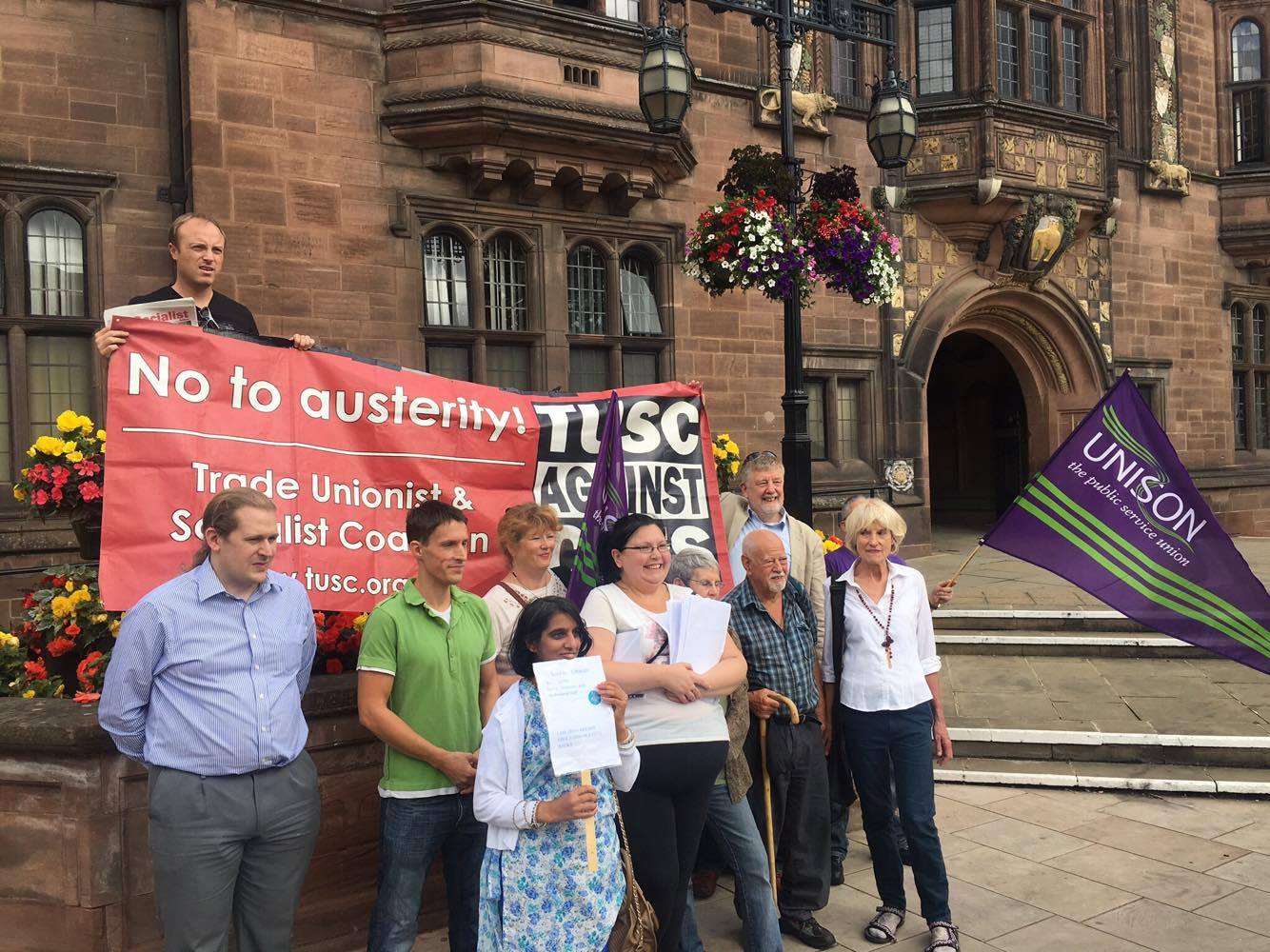 Campaigners just before handing the petition in to Coventry City Council

Campaigners from Save Coventry Libraries have today handed in a petition signed by nearly 2000 people against the plans by Coventry City Council to reduce and close library services around the city and replace fully trained paid staff with volunteers.

Campaign organiser Sarah Smith of Save Coventry Libraries handed over the 1,886 strong petition, with another 456 having signed online. This was just the first batch of signatures, with further protests and petitions planned against not only the library cuts, but also other parts of the Connecting Communities programme that will see massive attacks on children’s and youth services throughout the city.

We repeat what we have stated many times before – the Council do have a choice. They should not be passing on the Tory cuts to the people of Coventry. Labour Councillors should be organising a fightback against central government, linking up with other Labour Councils to say ‘enough is enough’, and demanding more resources for the services we need.

Coventry Socialist Party and the Trade Unionist and Socialist Coalition (TUSC) look forward to helping to build the anti cuts campaigns in Coventry.

Lobby the Council Cabinet on Tuesday!

City of Culture – or City of Cuts?

Coventry City Council’s Cabinet will meet on Tuesday 30th August to approve the beginning of the consultation that will see further cuts and closures to the tune of £4 million to libraries, the youth service and children’s centres.

Under the programme called “Connecting Communities” the plans from the Labour Council will further reduce vital public services in our city hitting ordinary people the hardest. Read this report for what we think the Council should be doing instead of passing on the Tory cuts to the people of Coventry.

The campaign group Save Coventry Libraries have called a lobby of the Cabinet meeting. The lobby will begin at 1pm, outside the Council House, Earl Street. 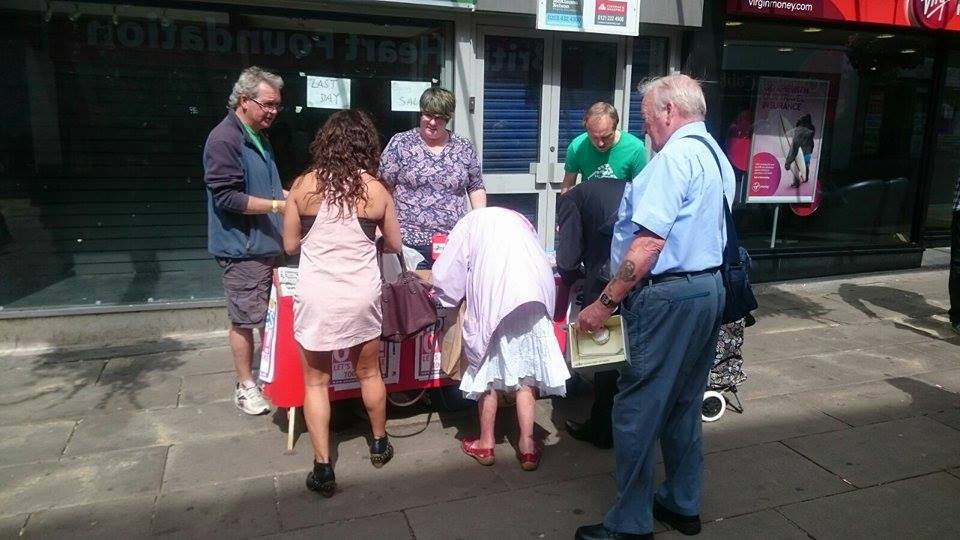 Campaigning in the City Centre

Members of Coventry Socialist Party were campaigning against library closures over the weekend, with a campaign stall in the City Centre and supporting the Save Coventry Libraries campaign at Arena Park Library.

Over 800 people signed the petition over the day, showing how strongly people object to the councils plan to close libraries across Coventry. Some libraries are threatened with closure altogether while some will be closed unless volunteers come forward to run them. Many staff will lose their jobs.

Arena Park is a well used library, but is scheduled to close on August 27th. While campaigning there on Saturday we found that many service users were not aware that it was closing and that there is no alternative provision.

More than 1000 people have signed the petition in total – Coventry Council should listen and not close libraries!

Lobbying the council – save our libraries!

Around 70 people braved the rain yesterday and joined a lobby of Coventry Labour Council organised by Save Coventry Libraries.

A number of councillors passed the demo and spoke to protesters saying that while they appreciate that libraries are a crucial service, they have no choice but to make cuts and close libraries. Let’s be clear, they do have a choice – the council could use the £84million+ that they have in reserves to fund services for a year, while building a campaign to demand the money back from central Government.

It is unfortunate but not surprising that most of the Labour councillors who voted to close these libraries are opposed to Jeremy Corbyn’s leadership of the Labour Party. It is a sad state of affairs when they spend more time attacking socialists on Twitter than they do defending the jobs and services of people in Coventry!

Save Coventry Libraries is encouraging people to write to their local councillors and MPs and tell them what your libraries mean to you, and that libraries are a necessity and a basic human right, not a luxury.