The below report and article is from the Socialist Alternative organisation in the USA (co-thinkers of the Socialist Party in the US) where a major victory has been won for a $15 an hour minimum wage in Seattle. The campaign and struggle developed on the back  of the historic election victory of Socialist Alternative member Kshama Sawant to the Seattle City Council last November. The struggle provides important lessons and inspiration for the fight for a £10 an hour minimum wage here in the UK.

Workers can win – Victory for $15 campaign in Seattle 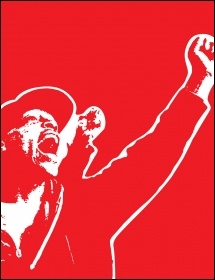 “We did this. Workers did this. Today’s first victory for $15 will inspire people all over the nation,” said socialist Seattle city councillor Kshama Sawant.

She was speaking after the 2 June meeting of the city council which voted to adopt a minimum wage of more than double the federal US rate. $15 an hour (about £9) will raise 100,000 low-paid workers in the city out of poverty.

What’s the difference between Seattle and the other cities in the US where workers have also been fighting heroic battles demanding $15? Mass campaigning built support for $15 and elected Kshama, a member of Socialist Alternative (co-thinkers of the Socialist Party in the US) last November. This was a turning point. 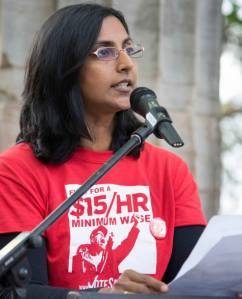 A Guardian website article reports: “Kshama Sawant, the only socialist city councillor in the US, whose election campaign last year became a driving force behind the minimum wage legislation in Seattle, hailed the vote at a boisterous meeting before a packed council chamber as a ‘historic victory’ for working people.”

Kshama exposed and opposed how big business weakened the legislation but she voted for $15. She said: “We’ll come back to the questions of tip penalty, the long-phase in, the training wage. What was lost through corporate loopholes is a reminder to us that outcomes are determined by the balance of forces… we need to continue to build an even more powerful movement strong enough to overcome the counterattacks from business.”

And Kshama explains: “My organisation, Socialist Alternative, was the backbone to this struggle. We have provided analysis and strategy, first to win this important seat in City Hall for a socialist and then immediately to turn it into a tool for organising.”

The 15 Now campaign set up by Kshama and Socialist Alternative established neighbourhood committees across the city which organised rallies and meetings. Fast food workers had protests and strikes demanding $15. Kshama pointed out: “This was not won at the negotiating table, it’s not a result of the generosity of the Democratic Party – it is a reflection of what workers won on the streets.”

The historic victory in Seattle shows what can be achieved when workers fight back. It shows the strength given to a movement when representatives of that movement are elected to political office and use their position to drive home its aims. This should be an inspiration, not just to workers in Seattle and the US, but to working class and poor people, socialists and trade unionists internationally.

As Kshama said after the vote: “$15 in Seattle is just a beginning. We have an entire world to win.”

US: How Seattle won a $15 minimum wage

Seattle is the first major US city to pass a $15 an hour minimum wage. 100,000 workers will be lifted out of poverty, and millions will be inspired all over the country and around the world.

On 29 May the city council’s committee dealing with the minimum wage voted to raise Seattle’s minimum wage to the highest in the country.

The proposed law will mean that starting on 1 April 2015 all workers in big businesses like McDonalds and Starbucks will see an immediate increase to $11 an hour and by 2025 all workers will be making a minimum of $18 an hour.

Altogether it is estimated that Seattle businesses will have to pay their workers an additional $3 billion in wages over the next ten years! This demonstrates that struggle pays – ordinary people can take on the biggest corporations in the world and win, when we organise and fight back.

The movement of fast food workers, inspired by 2011’s Occupy, put $15 on the agenda across the country. This received a boost in Seattle when the labour movement successfully won a $15 ballot initiative last November in SeaTac, a small town outside Seattle. But it was the election of Socialist Alternative candidate Kshama Sawant to Seattle City Council in November that was decisive in creating an unstoppable political momentum for $15 in Seattle. Kshama ran on a bold platform of $15, creating a major debate throughout Seattle, and won with almost 100,000 votes.

Shortly after the election Kshama and Socialist Alternative launched the campaign ’15 Now’ to keep the pressure high. 15 Now set up eleven action groups in neighbourhoods across the city mobilising in the streets and at public forums.

Through her public position Kshama was able to counter the propaganda in the corporate media and expose big business’s attempts to water down $15 and hide behind the concerns of small business. Against the claims of some that electoral politics only serves to co-opt movements, we showed how elected office can be used to build and strengthen them.

Initially all the Democratic Party politicians in Seattle opposed the demand for $15. But given the huge public support that was developing, the two main Democrats running for Mayor both came out in favour of $15 last September. After winning the November election, Mayor Ed Murray said he supported $15 but wanted to do it in a way “that would work for business, too.”

Murray set up an Advisory Committee of business and labour leaders (but mainly business) to negotiate a compromise. The business and political establishments recognised that there was no stopping $15, but they used the process to insert a number of corporate loopholes such as a phase-in over many years. Business fought until the final days of the city council process to water the bill down further.

At the vote, a majority of Democratic Party councilmembers moved to change the implementation date until April next year and include sub-minimum teenage and training wages. 15 Now and Socialist Alternative mobilised supporters to come to the City Council meeting on 2 June to fight for the removal of all loopholes. 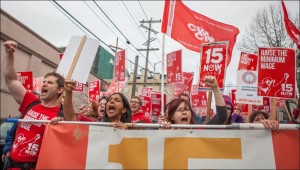 A Mass Demo of the $15 campaign

This process has demonstrated the reality that, even though the Democratic Party uses more progressive rhetoric than the Republicans, fundamentally both parties work to serve the interests of big business. On a national level, the Democrats have failed to seriously organise and fight for a $10.10 an hour minimum wage which President Barak Obama floated in his 2014 ‘state of the nation’ speech. Instead they are using it as an electoral gimmick for the 2014 elections.

That is why Socialist Alternative argues, as we did in Kshama’s election campaign, that working people need our own political alternative to the Democratic and Republican parties. Given the huge alienation with Congress, the mistrust in politicians and the need to defend working class families, there is a unique opportunity opening up to build a new party for working people.

While Seattle has won the highest minimum wage in the country, big business was able to weaken it in a number of ways. There are unreasonable delays of three to ten years for the $15 to be fully implemented (depending on the size of the business you work for), and a tip penalty and healthcare deduction were added for the first ten years. This was not inevitable.

In our view the strategy of those leading the main labour unions was not focused on building the movement from below but instead oriented towards the Mayor’s process of negotiating with business. They believed this was necessary because labour could not win a direct and open clash with big business.

After decades of setbacks and historically low levels of class struggle, it is understandable that the self-confidence of the working class is low. However, Socialist Alternative argued that this was an enormous opportunity to try to mobilise new layers of workers into a movement. This would bring more pressure to bear and is a critical way for a new generation to gain experience of organising, and to learn political lessons. This is the way to begin to rebuild the workers’ movement.

Labour unions in the US have tremendous resources and political weight. They have millions of dollars and millions of members that could be mobilised behind a bold campaign to raise the minimum wage. The fast food strikes have played an important role in drawing attention to the issue of poverty wages, but the movement could be much stronger if the unions ended their reliance on the Democratic Party and looked to mobilise the full power of working people through building democratic mass movements.

Over the last three decades, labour’s strategy of trying to appease big business to get some concessions only increased the demands of Corporate America. It’s time to drop this futile effort.

And we must remember that no reform is guaranteed under capitalism. Big business could challenge what’s won in Seattle with a referendum or other means so our movement must be prepared to mobilise and defend what we’ve won.