A Coventry Labour councillor has set up a business designed to take over schools and turn them into academies. Councillor David Kershaw, who is cabinet member for education, is heading a new academy company called the West Midlands Academy Trust.

Writing in the Coventry Observer, Les Reid revealed that the company was set up just last month by Cllr Kershaw and is believed “to be in line to win Tory government permission to take over five struggling schools in Birmingham“. The five schools are understood to be those which make up the Perry Beeches Trust and are already Academies. The fact that these schools are struggling is a clear indictment of the government’s Academies programme.

Cllr Kershaw has done this at a time when Labour are campaigning against Tory plans to force schools to become academies, and have been distributing leaflets around Woodlands ward claiming local Labour council candidate Patricia Hetherton is “fully behind the campaign to save Woodlands Academy”. After the release of the Panama Papers implicating leading politicians in tax dodging, this is yet another example of hypocrisy.

Hetherton’s leaflet also claims that “[she] knew that the opening of Finham Park 2 would have an impact on student numbers in the area”. “Local” Labour MP Geoffrey Robinson also features on the leaflet, and last month he said the same to the Coventry Telegraph. However, while they say this now, Cllr Kershaw wrote to the Department for Education last year expressing support for Finham Park 2!

Cllr Kershaw has also been key in advocating and pushing through the council’s library closure plans, and the (currently shelved) plans to cut transport to schools for disabled children. As a former headteacher, it is shocking that he seems willing to make cuts that will clearly damage children’s education.

Other partners in the business include Alan East, a Labour candidate for Bablake ward in May. Locally this is yet another example of Labour saying one thing and doing another – how do Kershaw’s actions compare with the anti-austerity policies of Jeremy Corbyn?

Members of the National Union of Teachers (NUT) are campaigning against the enforced academisation of all schools and will be balloted over strike action against funding cuts and threats to teacher’s contracts and pay and conditions. We give them our full support – concerted industrial action can stop these plans and bring this government down!

‘No more academies. No more cuts’

A Coventry teacher speaks out before NUT conference

The annual conference of the National Union of Teachers begins today in Brighton. Socialist Party member and NUT activist Nicky Downes is a delegate from Coventry. Speaking to us whilst travelling to this key meeting of teacher trade unionists she told us

The education system in this country is well and truly broken. We need to fight back just like the junior doctors are doing to save the NHS. If this doesn’t happen we will continue to have a system that values profit above learning. A system that believes anyone can teach and the best education comes from a book or computer programme flogged by Pearson. No more academies. No more cuts. A qualified teacher in every class.

Jane Nellist, also from Coventry, and a member of the national executive of the NUT has written an article calling on the unions to act against the academies onslaught. It can be read here

If you are a teacher and want to link up with Socialist Party members in the NUT, please fill in the form below!

Protesting at the Department of Education, Coventry

A lively protest took place in Coventry earlier this evening against the government’s plans to force every school to become an academy.

The demonstration, held outside the Department of Education building and organised by the National Union of Teachers (NUT) was supported by teachers, parents, school  and university students. It also drew support from members of UNISON, UNITE, GMB, CWU and Coventry TUC.

Jane Nellist, recently re-elected to the national executive of the NUT, chaired the protest explaining why her union was so opposed to the Tory privatisation plans.

Eileen Hunter, an NUT activist from Warwickshire spoke passionately about how these plans needs to be fought.

Sam, a student from Coventry University, spoke about the need to forge links, and brought solidarity greetings from Coventry students. 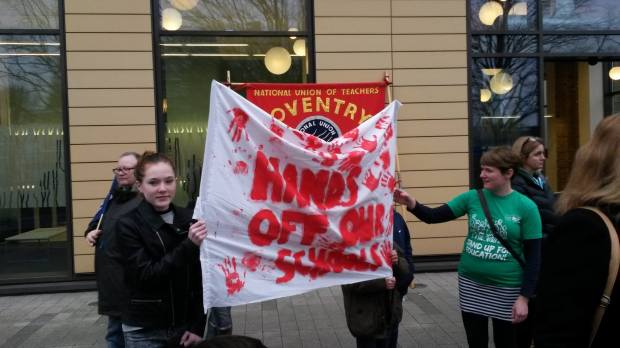 Hands off our Schools!

Parents also spoke about the effects that academisation has had on the education of their children. 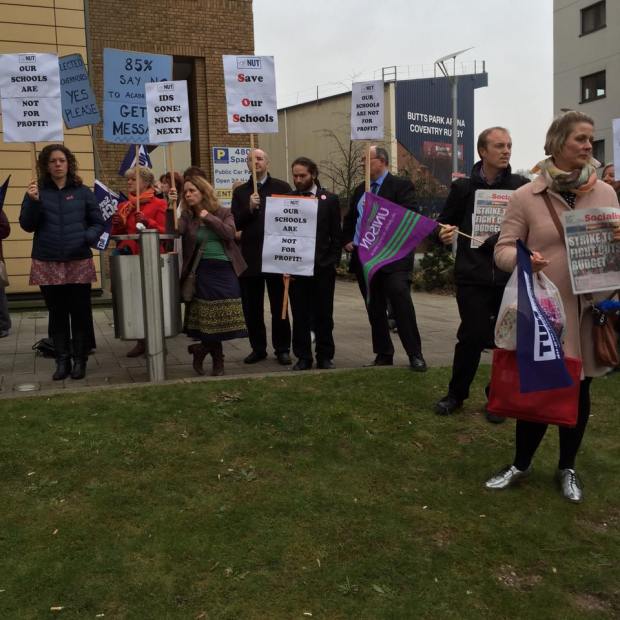 Outside the Department of Education

Paul Hunt, assistant branch secretary of Coventry City UNISON, explained how the Tory proposal will be an attack on UNISON members in schools. He spoke in support of a co-ordinated fight back between the public sector unions pointing out that the government is weak – witness the resignation of IDS and the splits over Europe. The junior doctors have shown a lead, now is the time for a general strike in this country!

All speakers showed that the fight must now be taken to the government.

Jane Nellist closed the protest explaining how her union conference this week must come out with clear plans for industrial action and that Coventry NUT would be continuing a campaign after Easter to defend education.