Coventry’s waste service HGV drivers in Unite the Union are currently being balloted for strike action over low pay and an attempt by the Labour-run council to wreck the bin workers’ Christmas.

At the eleventh hour the Council has suddenly decided that the bin workers don’t deserve a Christmas break. Previously they always had the week of Christmas day off. This decision was made despite the fact that they have been risking their lives working through nearly two years of the Covid pandemic.

With a month until Christmas itself the bin workers’ festive plans could be ruined and family life disrupted.

The second issue brought by Unite members is that the drivers’ wages are as stale as the waste they’ve been collecting all year. While HGV drivers are being offered huge salaries in the private sector, our bin workers have had real terms cuts for years. Other councils have, under pressure, brought in retention payments or increased pay outright. Coventry Labour Council refuses to pay anything more.

The Council was quickly caught out aggravating the situation when even before the ballot began it warned residents about ‘impending disruption’.

They clearly want to turn residents against the drivers rather than settle the issue.

Perhaps they’re jumping the gun out of fear that they’ll lose this fight. After all, Brighton’s bin workers in GMB won outright against their council just last month, and weeks ago Sheffield’s bin workers -also in GMB- called off their strike action for a modest increase above what their council had offered.

Coventry Council should also remember the gigantic victory won by Unite’s bin workers in neighbouring Birmingham just 4 years ago. Then, the Labour council tried its luck at firing 113 Grade 3 staff to re-employ some at Grade 2 – essentially cutting their pay to cut costs. The bin workers took 12 weeks of strike action before the council caved and they retained their grades, pay and conditions.

The Coventry ballot follows a foul record by the Council with its own workforce.

In the summer the bin workers hit headlines after some collections were missed, which the Council blamed on some staff taking unofficial action but Unite pointed to under-staffing. At the time an anonymous bin worker told the Coventry Telegraph “daily targets have increased whilst the workforce has decreased, leading to bin crews being given impossible tasks to complete and the health and safety of the employees being put further at risk.” “The workforce are being driven into the ground.”

Since 2010 the council has slashed over 2000 jobs as part of carrying through brutal Tory austerity. It has repeatedly clashed with trade unions and has ignored protests against savage cuts to its services in that time, even when anti-cuts campaigners, including from the Socialist Party, have demonstrated that legal no-cuts budgets are possible.

The fact that they still charge the families of disabled 16-18 year olds £600 a year for school transport shows this council will make cuts even when it causes great hardship for residents.

Which leads us to the present ballot. The council is demanding something for nothing from its own workforce again. And it’s doing so when it could easily end the dispute and stand on the side of workers in Coventry, not against them. Remember, the first issue is just returning the Christmas shifts back to how they were a couple of weeks ago.

And on pay, the council could frankly pay far more to keep its bin workers, and even hire more to make their jobs easier.

With total council reserves amounting to £144m and wide-ranging borrowing powers, far more could be done for the people of Coventry while a fight back against austerity is built. But no Labour council has shown any interest in taking up that fight, which is why the Socialist Party campaigns for anti-cuts socialist councillors under the Trade Unionist and Socialist Coalition [TUSC].

The TUSC umbrella includes the RMT trade union which co-founded the coalition after it was booted out of New Labour, as well as other socialists and trade unionists.

In recent months local TUSC groups have been organising People’s Budgets to bring together unions and local organisations and residents to develop no-cuts budgets that will meet the needs of local people, rather than follow the Tory cuts agenda. Coventry and Warwickshire TUSC will be organising People’s Budget meetings in the New Year. We will be standing in the May 2022 council elections pledging to use council money to restore and create more jobs on decent pay and improve our services. That will include waste and cleaning services. We appeal to any bin workers and other council workers who wish to be involved to get in touch.

Workers Are Fighting Back

The multiple U-turns made by Boris Johnson and his chancellor during the pandemic, spending billions when public pressure was on them, show that with a fight the Tories could be made to pay up and the working class could win victories. The same is true for Tory-lite Labour Councils. But we still need more.

Many workers are striking back against the bosses’ ‘fire-and-rehire’ offensive – which bosses are using to boost profits by cutting wages. Public sector workers, hit by a decade-long pay freeze, are rejecting the Tories’ insulting pay offers and preparing to fight back.

UNISON council workers have begun a ballot on strike action against their national pay offer, while the GMB is currently holding a consultative ballot, and Unite is due to start balloting in January.

The pandemic has helped reveal who real keeps society running. Workers should be paid and treated fairly for the vital work they do. Planned and organised strike action by the bin workers can defeat the council on this Christmas working arrangements attack, and force them to back down on other issues and win better pay.

Mass meetings of bin workers and all other council departments should be called to discuss and build support. Unite and the other council unions should prepare a mass campaign for further action across the council workforce against further attacks by the Labour Council.

Unite members in the council should discuss supporting anti-cuts and TUSC candidates in the May local elections in Coventry, or consider standing as anti-cuts candidates themselves. See the Socialist Party appeal to trade union members here: https://www.socialistparty.org.uk/articles/33352/17-11-2021/an-appeal-to-trade-union-members-to-stand-as-anti-cuts-candidates

Former Coventry Militant Labour MP Dave Nellist recently spoke on the picket line of the Birmingham bin workers dispute, which has resumed after the Labour council reneged on a deal they had agreed with the union. Watch the video below:

Workers have been issued with redundancy notices after the council withdrew an offer which meant there would be no redundancies. Other workers also face a £4000 a year pay cut.

There is a rally to support the bin workers being held in Birmingham on Sunday 17th September at 11am outside the council officers. Please come along to show solidarity with the workers in this dispute! 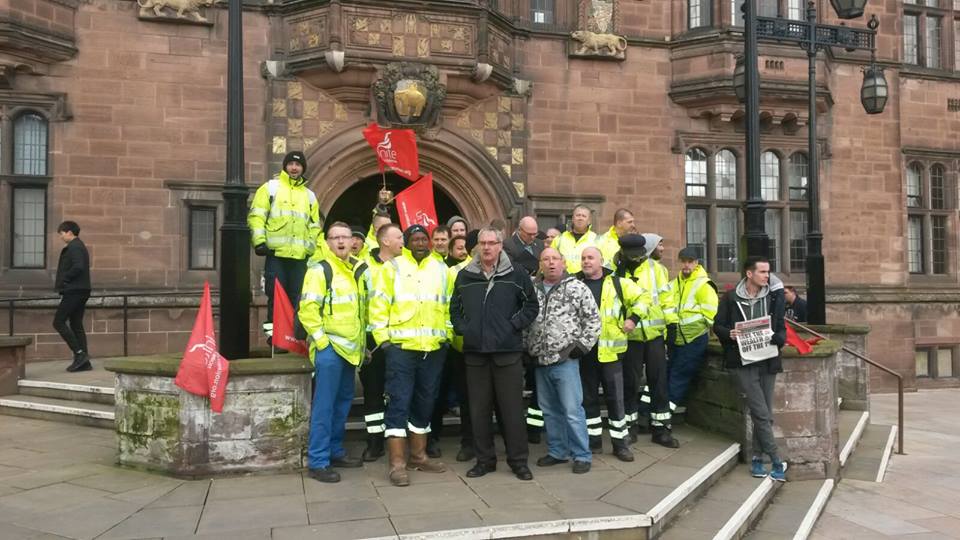 Outside the Council House

Coventry refuse workers based at Whitley Depot today downed tools in response to the suspension of a UNITE shop steward amid allegations of ongoing bullying by management.

In a show of strength and solidarity over 30 workers descended on Coventry Council House in the City Centre to protest and support their colleague, as union representatives talked with management. 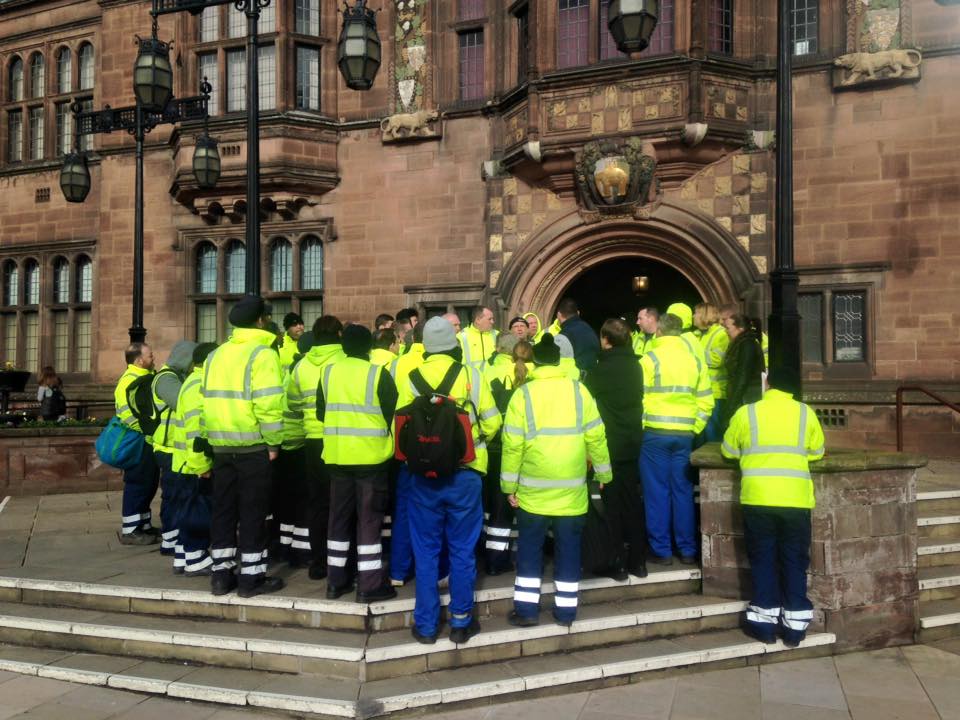 Determined to show their support, workers remained outside the building all morning and early afternoon. A meeting tomorrow morning was planned to discuss any updates and any further action. It is vital that UNITE nationally throws its support behind the rep and this group of workers, and activists from other Council unions need to discuss how to show support. Unions are fighting not just for their own members, but also the future of public services. Everyone in Coventry needs to support the action today, and any future action called by the union.

An injury to one is an injury to all! We demand the immediate reinstatement of the suspended rep!

Discussing the next steps