Junior Doctors took to the picket line at the entrance to Walsgrave Hospital once again this morning despite the relentless rain.

It marked the beginning of the first of three 48 hour strikes planned by the BMA for 9-10 March, 6-7 and 26-27 April, in response to Health Minister Jeremy Hunt’s declaration of war on the doctors by imposing a contract which will remove safeguards to them working more unsocial hours, and for less pay.

It’s clear that this dispute is over so much more than pay and hours. Junior doctors know the NHS is under threat. This contract is part of the Tories’ plan to destabilise the NHS, run it down, claim it is failing, and then pass it over to the eagerly waiting hands of the private sector.

Doctors didn’t pick this fight but make no mistake, they are determined to win it! They know what’s at stake. It is essential for all health workers and all of us who use the NHS to support them in their fight. Other health unions need to show the determination of their BMA colleagues and come together to organise coordinated action to save the NHS.

A national demonstration in March should be called as an emergency to galvanise support behind health workers and build for an intensive campaign to defeat the government.

Striking doctors on the picket line at Walsgrave

Over 25 junior doctors took to the picket line yesterday morning outside Walsgrave Hospital. The youthful and lively strikers were inundated with support from the public with non stop honks and cheers from passing cars, pedestrians and other hospital staff.

Jeremy Hunt’s embarrassing attempts to discredit the doctors over recent days in numerous TV interviews have only given further determination to these doctors to carry on battling – and even more reason for the general public to support them!

As one doctor said as he was setting up flags and placards “the Tories have attacked the welfare state since its creation… now they have the cheek to get something for nothing off us.”

The wildcat unofficial strike action taken by Coventry refuse workers the day before was also widely discussed, and added a further inspiration and confidence boost to the doctors in this ongoing fight with the government.

STOP PRESS: Today the Tory Health Secretary Jeremy Hunt, has just announced in the House of Commons that the new contracts for Junior Doctors will be imposed on them. Coventry Socialist Party gives its full support and solidarity to the doctors in its battle with the Tories and and the wider struggle to defend the NHS. 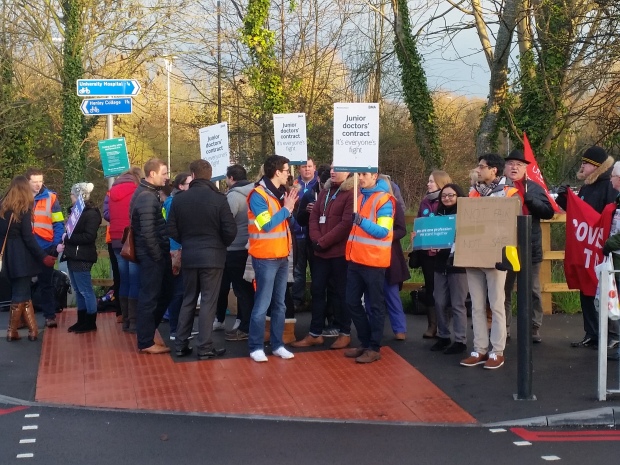 Junior Doctors marched out of work at University Hospital Coventry at 8am on Tuesday to form a very well supported picket line.

Trade unionists from NUT,  Unite, UNISON, PCS and Coventry TUC as well as other hospital workers gave solidarity support for the Junior Doctors campaign which, although their strike was about attacks on their pay and working conditions, they made clear that they need people to understand that what is ultimately at stake under the Tory govt is the NHS itself.

There was a clear determination to win this battle. The young doctors understand that if this government get away with imposing this contract then, as Petra who has recently returned to work following the birth of her child told me (and as seen on Local TV), she will find it difficult to work a contract that means longer hours and less pay.

It was clear from the enthusiasm of drivers beeping their horns and waving that the junior doctors have the public support.  Their victory will be a victory for all of us.
Send messages of support to gerard.millen@gmail.com

Read reports from around the country here