Successful day of campaigning for Save Coventry Libraries

Saturday saw a successful day of action for the Save Coventry Libraries campaign. The “Big Library Sell Off Tour” visited the five libraries that Coventry City Council are planning to close. The Council say that unless volunteers/community groups come forward to run these vital public facilities then they will have no choice but to close them. Campaigners categorically reject this false choice put forward by the Labour Council – particularly when they have £84 million in reserves, and have increased these reserves. In fact they have doubled over the last 5 years!

The Socialist Party asks why don’t councillors use some of the reserves to offset these cuts and work with the people of Coventry to mount a campaign to force the Tory government to properly fund essential local services?

Labour should be opposing these cuts here in Coventry – not voting them through in the Council Chamber. Jeremy Corbyn opposes austerity but the majority of local Labour cllrs spend more time fighting him than they do the Tories!

At each of the five libraries library users were angry and upset that their library could close. We collected many more signatures for our petition and handed out nearly a 1000 leaflets encouraging people to get involved in the campaign. It sent a clear message to Coventry City Council – keep all the libraries council run and fully staffed, with no job losses!

Coventry anti-cuts campaigners stage ‘read in’ protest outside (and inside!) Council House 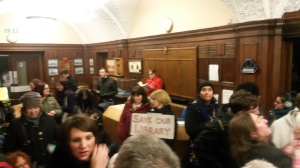 Dozens of Coventry people campaigning in support of libraries in the city staged a magnificent protest this evening against the proposed cut backs in our city. The event was organised by the campaign to save Coventry libraries and drew support from people across the city who are involved in different campaigns as well as Coventry TUC, Unison, NUT and members of other trade unions.

The protest comes the day before the Council are due to vote on a £15 million cuts budget that would see services across the city slashed. Under public pressure from the campaign the Labour Council had last week announced that they were back tracking on their plans regarding library closures in the city – this is testament to what is possible if ordinary people get organised. See previous article here for more detail on this announcement and what it means.

Protestors gathered outside the Council House, from many different age groups and areas of the city. Protestors read books and newspapers to illustrate what libraries mean to them. Of course they also mean much more, a place to use the internet to make job applications and access council services, to meet other people and feel part of a community. Little wonder people are fighting tooth and nail to keep them. 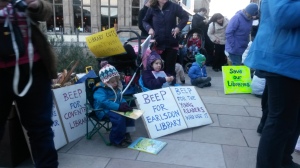 Support from all ages!

After the successful demonstration through Coventry on Saturday, we need to continue this momentum and further build the anti-cuts movement across the city to defend all jobs and services. Our Councillors should expect more protests if they vote through the Budget tomorrow.

Reminder – Lobby the Council, Tuesday 24th Feb, 1-2pm. Outside Council House. No to cuts in our city!

More photos from the protest below. 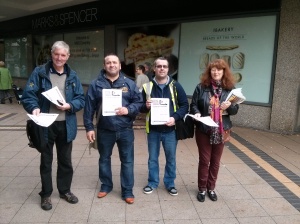 The Socialist Party were campaigning across Coventry today. Party members supported RMT members at City Link who were leafletting outside Marks and Spencers in protest against attacks on their terms and conditions.

Elsewhere the campaign against attacks on our NHS continued, with campaign stalls set up Cheylesmore, Earlsdon and the city centre. Last week up to 60,000 people marched through Manchester in protest against the Tory attacks, and many Coventry people stopped to sign our petitions and take leaflets against NHS privatisation.

‘People are angry against cuts to the NHS. But it is not just our NHS under attack but all public services including council jobs and education, as well as the welfare state. We need a united fightback that opposes all cuts in jobs and services.’

The Socialist Party has a long history of campaigning against cuts to the health service, and will be continuing the fight over the coming weeks and months. It is a disgrace that the Tories are proposing to cuts NHS workers pay at a time that the cost of living is rising. But we need to remember that Labour can’t be trusted with the NHS – after all it was the Labour Party who told us that the Private Finance Initiative is the only game in town. We say the NHS must be kept as a public service, free at the point of use!

Thank you to everyone who stopped and signed our petitions and showed support, particularly those that made donations no matter how small. We rely on donations from ordinary people to keep our campaigns going, unlike the other parties we have no big business backers. 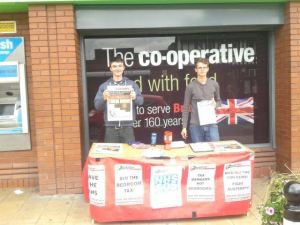 We encourage all of our readers to consider joining the Socialist Party – help us strengthen the socialist opposition to cuts and capitalism. If you want to find out more / join – click here