Save Foleshill Baths campaign defiant until the end 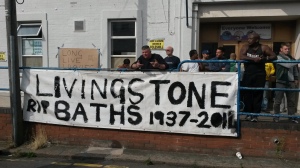 Two days prior to this on Friday 22nd August, the campaign to save the Baths held a final protest to show that they remained united and would not go quietly. The event was well supported by service users and featured by the local press.

The centre had been open for 77 years before the Labour group on the council decided to take this away from the area in favour of a multi-million pound development at the AT7 centre, on the other side of the A444.

However it did not close without a fight and the campaign to Save Foleshill Leisure Centre remained defiant to the end. Although the battle was lost, members of the community involved in the campaign should hold their heads high for giving the Council one hell of a fight.

The campaign was launched by users of the Leisure Centre who took the fight to the Local Authority by getting out around the Foleshill area and to the city in general, launching a mass petition, leafleting, posters in shops and local businesses, holding numerous protests, lobbies and a march from Edgwick Park in Foleshill to the city centre.

Faced with the fact that it was a Labour council carrying out this closure, Will Bromwich an organiser of the campaign took the significant step of standing in the 2012 local elections in the Foleshill ward. A leaflet went out across the ward which explained why they were standing in the election and raising the profile of the campaign. Will came 3rd in the election gaining a very respectable 213 votes. The Socialist Party believes this points the way forward. When the three establishment parties all represent cuts and austerity, it is vital that trade unionists, anti-cuts campaigners and community activists develop a political alternative, including standing in elections. This is why we are working to build the Trade Unionist and Socialist Coalition (TUSC).

Don’t Deprive Keep Foleshill alive was one of the slogans on one of the banners of the campaign. It made perfect sense as Foleshill is one of the most deprived areas of the city. Facilities like the Leisure Centre should be defended anywhere they are threatened, but doubly more so in areas where there is a general lack of facilities in the first place. The Council claim the new centre is just 1 mile away. But as the campaign made clear, you have to cross the busy A444 and users of Livvies came from areas such as Radford, which makes the AT7 more than 1 mile away. 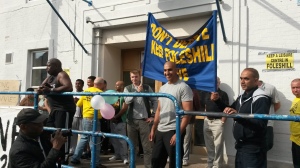 As Foleshill Baths closed its doors, the city’s 50m Olympic Pool also faces closure. This is despite over 11,000 people signing a people against what the Labour council are doing. Fairfax St is closing to make way for a 25m pool that will be part of an ‘entertainment’ facility along New Union Street after Spire and Christchurch House Council buildings are knocked down. Socialists support as many leisure / sporting / entertainment centres as possible which enable the widest possible number of people to take part. However we also believe in facilities that can help develop sporting talent. They are not mutually exclusive and it a complete fallacy being developed by leading Councillors that Fairfax Street is only used by ‘elite’ swimmers.

Although the Council did not reverse its decision, the campaign can be extremely proud of everything it achieved. A wide range of people used the Baths, and that was seen in the campaign which united campaigners from a diverse number of backgrounds who were committed to keep it open. It reached out across the city and won widespread public support and sympathy, as there is much affinity with Livvies as thousands of people used it over the years and learnt to swim there.

The whole process exposed the Labour Party councillors for being the local agents of the Tories in closing the Leisure Centre down and ignoring people in Foleshill and across the area.

The Socialist Party were very proud to do what we could to support the campaign and to stand with some outstanding campaigners. There will clearly be more battles to come, as Labour continue to inflict Tory misery on our city – battles that communities and importantly the trade unions need to prepare for.