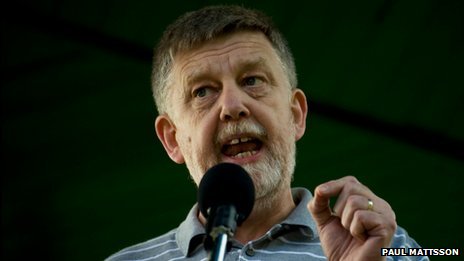 The Coventry Telegraph recently carried a full page article by Simon Gilbert about the Socialist campaign, led by Dave Nellist, against the EU. Dave has also challenged UKIP leader and former banker Nigel Farage to a debate on the subject. Please read the article below and share!

Former Coventry MP Dave Nellist is taking on Nigel Farage and Boris Johnson in the race to lead the official “out” campaign in the run up to the European Union referendum.

Mr Nellist is fronting the Trade Unionist and Socialist Coalition (TUSC) campaign to leave the EU – a left-wing alternative to the Vote Leave campaign supported by Tory London mayor Mr Johnson and the Grassroots Out campaign backed by UKIP leader Mr Farage.

All three campaigns have submitted bids to the Electoral Commission who will decide on April 14 which will be chosen as the official campaign.

Ahead of the decision, Mr Nellist has challenged Nigel Farage and Boris Johnson to debate the issues around leaving the EU. Mr Nellist claims their campaigns can not be truly representative of the calls to leave due to what he perceives as vested interests with big businesses.

He said: “The Grassroots and Vote Leave campaigns, epitomised by Nigel Farage and Boris Johnson, are the Tory Party within business.

“Working class people and trade unions have different priorities. If EU constructs prevent a successful British economy for workers, we should be opposed to them.”

He added: “Before the Electoral Commission makes it decision, let’s have a public debate: Who should be the voice of leave?

“Trade unionists and socialists, or bankers, Tories and ex-Tories?

“They can choose the venue – we don’t have to hold it in Port Talbot, Scunthorpe or Redcar if they’re too afraid to venture out of London – but let’s have the debate and see who really represents those millions of working class voters who will vote leave on June 23.”

The rewards for the winning campaign include access to a grant of up to £600,000, an overall spending limit of £7m, campaign broadcasts, free mailshots and free access to meeting rooms.

That has led TUSC to threaten the Electoral Commission with legal action if party bosses feel its bid has not been taken seriously.

Mr Nellist said: “We never make hollow threats. We have a large range of legal talent.

“We will have to wait and see how the process goes. We applied to have a verbal hearing with the Electoral Commission to make our submission, but that was turned down.

“They are considering our paper application along with the other two campaigns.”

Asked if he understood there might be some surprise at left-wing campaign to leave the EU, Mr Nellist said there was a long-running history of socialist opposition to EU membership.

He said: “I led the no campaign in Coventry during 1975. The Labour Party was opposed to the EU until the mid 1980s.

“If Tony Benn and Bob Crow were still with us, they would have led a trade union out presence.”

He added: “The view of most union leaderships is to stay, not to leave. But there will be significant sections who are against it at times like when they see it’s not possible for the British government to nationalise the steel industry because EU legislation says that would be state aid.”

Asked if he thought TUSC would have the resources to effectively deliver a national out campaign, Mr Nellist said: “We are the sixth biggest party in Britain.

“We stand in 125 towns and cities. If we were designated as the leave campaign, with the £600,000 funding that would follow, we could design and deliver leaflets to the vast majority of homes in the country. We are capable of doing campaigns of that size.”

He added that the party planned to run a left wing exit campaign even if they were not chosen as the official voice of Brexit.