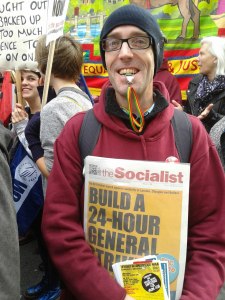 The following article was written by Rob McArdle who is a campaigner for the Trade Unionist and Socialist Coalition (TUSC) and the Socialist Party. He is also a member of the Communication Workers Union and stood for TUSC in Lower Stoke ward in the recent local elections. The article was published in the current issue of ‘The Socialist’ newspaper.

On the very week Royal Mail reported a 12% rise in operating profits to £671 million, the newly privatised company was complaining about ‘market competition’ from the likes of TNT.

It’s ironic that directors at Royal Mail recently toured the country seeking to convince workers that ‘external investment’ was the only way forward for Britain’s postal service.

As we have highlighted in the Socialist, privatising Royal Mail would be a big mistake for the public. And now, within months of its undervalued sell-off, the threat to the universal postal service is again on the agenda.

The daily delivery service to the 29 million homes and businesses is threatened because competitor companies like TNT cherry-pick end to end delivery in places like London and Liverpool.

The industry regulator Ofcom responded by saying: “We would expect Royal Mail to take appropriate steps to respond to the challenge posed by competition, including improving efficiency.” In reality this means increasing workloads and pressure on postal workers.

The threat of reducing the six-day delivery service would have a significant impact on jobs and services within Royal Mail.

It could also be used by management as a weapon to try and force through inferior working conditions and also have an impact on future pay deals.

Over the next few years we will see the battle lines being drawn between a management driven by market profits and the CWU union, who will need to defend their members against vicious cost-cutting attacks.

The historic deal that has just been signed by the CWU and Royal Mail protecting jobs and conditions, will be tested over the next two years. Postal workers are right to be concerned about their future once the agreed pay deal comes to an end. Thousands of jobs were lost at BT after privatisation of the telecoms company and those remaining workers have seen their terms and conditions weaken due to the ‘partnership’ between management and the CWU.

The lesson for postal workers is clear – they need the union to fight to protect the gains made over the years. Royal Mail bosses will continue their race to the bottom as they seek to increase profits for shareholders but the CWU will need to stay alert to the dangers of ‘partnerships’. Workers’ ultimate power lies in the ability to withdraw their labour as a last resort.

The solution for Royal Mail’s difficulties is simple; take it back into public ownership. Then the postal service could be delivering a service based on public need not on private greed. 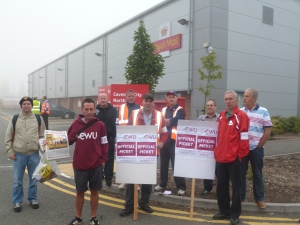 We have received the following comments from a CWU member who will be taking strike action in a few weeks time.

“Postal workers in Royal Mail have voted by 4 to 1 for strike action to defend our jobs, pensions and the services we deliver to the public, who up until last week, used to own Royal Mail. Before the ConDem government sold the profitable state asset on the cheap.

Shares in Royal Mail have rocketed in value by up to 50% since the government sold a majority of the company off, with many small ‘investors’ making £350 on the minimum buy-in of £750. Nice ‘work’ if you can get it!

This scandalous fire-sale of yet another public utility (think gas, electricity, water, rail, BT) was brought forward in an attempt to dissuade workers from voting ‘Yes’ in the ballot.

And the Chief Executive of Royal Mail, Moya Greene, even pledged to pay workers who cross the picket line a £300 bonus in December!

This ‘scab’s bonus’ would be payable if you crossed the picket line, mounted by your colleagues to defend your job.

But workers realise that we stand to lose a hell of a lot more after the 3 year protection of terms/conditions offered by Royal Mail expires.

Our jobs for a start!

Not to mention the erosion of our pension entitlements. Yes. Entitlements. Because Royal Mail took a pension payment ‘holiday’ for 13 years while we carried on paying in. And now our pensions are under attack again. Even after the government ‘guaranteed’ OUR pensions. In exchange for the £25 BILLION of assets in the fund of course.

Royal Mail may now be a PLC. But the workers still treat your mail with TLC. We care about the service we provide. We always have. And we always will.

And we’re willing to fight to show it.

Initial strike date is 4th November. It will be an all out 24 hour strike, with 24 hour strikes of different functions to follow. i.e deliveries, collections, processing, distribution.

So Royal Mail has 2 weeks to meet our demands. Which include maintaining the service to you the public at the level it is today.

CWU should begin talking to the Fire Brigade Union, the teaching unions and any other union who is in dispute , to co-ordinate future strike action and show the ruling classes who really runs the country.

For a one day General Strike of ALL workers!”

By a Coventry postie

No to Royal Mail privatisation – Rob McArdle speaks out 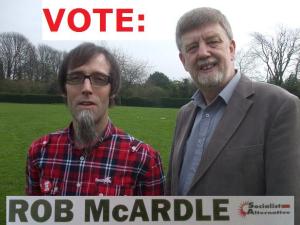 Selling off Royal Mail might bring short term gains for shareholders and the government, but it is customers who will lose out in the long term.

We have seen the same happen with energy and rail price hikes following privatisation.

More and more people now
think that the rail and energy companies should be brought back into public ownership, with the bosses being held to account.

In the coming years Royal Mail will tell us how it can no longer afford the daily delivery to 29 million homes and businesses. Jobs will be cut and services withdrawn, while shareholders and institutions enjoy siphoning off the profits in the form of dividends.

I have always been proud to work for the public Royal Mail, because we provide a valuable service. How long before our postal service becomes foreign owned? How many years before you have to collect your mail from a box far your home? No wonder the government rushed through the sell-off, they know 70 per cent of the public opposed Royal Mail privatisation.

This is just the latest example of postal workers taking action as a result of local managers’ actions.

For several months now, up and down the country, Royal Mail managers have been using intimidation and threats towards workers in a drive to save money.

National agreements have been ignored, mail traffic figures have been ‘massaged’ and a climate of fear instilled, all to ensure that staff ‘absorb’ more and more work.

Such is the scale of the problem of bullying and harassment that the Communication Workers’ Union (CWU) has appointed an independent body to go in to workplaces and interview staff about their experiences.

As one worker on the picket line said: “I’m part-time and I’m on a rolling contract. Some of us were taken to one side the other day and told by a manager, ‘If you go on strike, don’t worry, it won’t affect your chances of having your contracts renewed!’ They were nice about it but there was a veiled threat there.”

END_OF_DOCUMENT_TOKEN_TO_BE_REPLACED

The following article is written by a postal worker in Coventry. The Socialist Party calls for full support for this industrial action 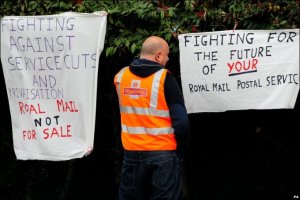 Banners from a previous picket line at the old Bishop Street office. From the BBC website

by a Coventry postal worker

Over 80% of the 200+ workers (members of the Communication Workers’ Union, CWU), voted in favour of a oneday strike to warn the local management that enough is enough, regarding the way the office is being run and the way workers are being treated.

Over several months now, the local management have refused to follow national agreements; there is       bullying/harassment of certain workers; and they make executive decisions daily to increase our workloads,regardless of the amount of mail coming into the office each day. Usually based on some opaque figures  relating to mail traffic volumes.