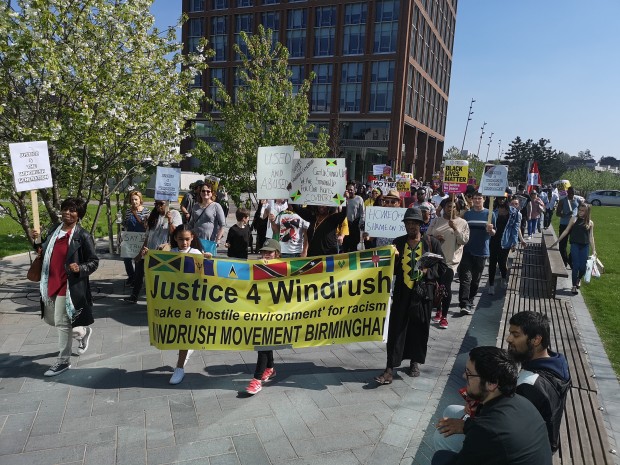 The demonstration starting off from Friargate

Nearly 200 people marched from Friargate to Broadgate on Saturday 5th May in support of the ‘Windrush generation’.

Speakers attacked Tory government policy, most clearly expressed by Theresa May when Home Secretary in 2012 which aimed to “create a really hostile environment for illegal immigrants” and which resulted in appalling personal cases of detention and threatened deportation.

Coventry, it was noted, was built over the last century on a wave of different populations from Wales, Ireland, Scotland, Southeast Asia, the Caribbean and most recently Eastern Europe. In the case of the’ Windrush generation’ they were invited after the Second World War to come and work in transport, factories and especially the NHS – ironically the Tory Minister of Health at the beginning of the 1960s who invited thousands of Caribbean workers to come and train as nurses, was Enoch Powell!

Speakers explained that the root cause of discrimination and racism in the 60s, 80s, and today was always the same – a way of dividing working people so that the rich, the employers and Tory politicians could more easily get their own way.

Now that Amber Rudd has gone, Teresa May must go too. Jeremy Corbyn and the Labour Party must increase the pressure for an early general election so that the Tory policies of austerity and the “hostile environment” goes too. We need a new government, prepared to act in the interests of working people, which would reverse the acts which led to the detentions and deportations, end all racist immigration controls, and clear up the question of citizenship in the favour of the ‘Windrush generation’ now.

We will be posting pictures from this protest on our Facebook page over the next few days.
September 20, 2017Leave a comment

Break the pay cap – join the protest in Saturday 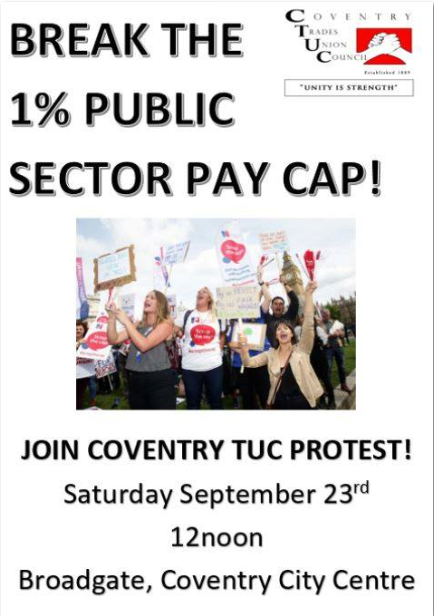 Coventry Trades Union Council have organised a protest for this Saturday to campaign against the Tory government’s 1 per cent pay cap on public sector workers. Speakers will also highlight the plight of workers in the private sector, who also face attacks and insecurity in the form of zero hour contracts and much more.

Read this article from a recent issue of The Socialist newspaper for further background.

A mass demonstration has been called in London on Saturday 1st July. The Socialist Party is fully supporting this protest – we need to build maximum pressure on the Tories to evict them from office, as soon as possible. Shadow Chancellor John McDonnell has called on 1 million people to take part. We urge all organisations, including the trade unions, the entire Labour Party and the TUC to actively support and build this movement to get May and the Tories out, and to help a Corbyn-led Labour government in to power. From cuts to emergency services, to coalition with the DUP and now the corporate and capitalist murder of innocents housed in Grenfell Tower in West London, we need to get them out and to fight for socialism.

There is transport being organised from Coventry by Coventry TUC and others, details are being finalised but fill in this form below and we can reserve your place. 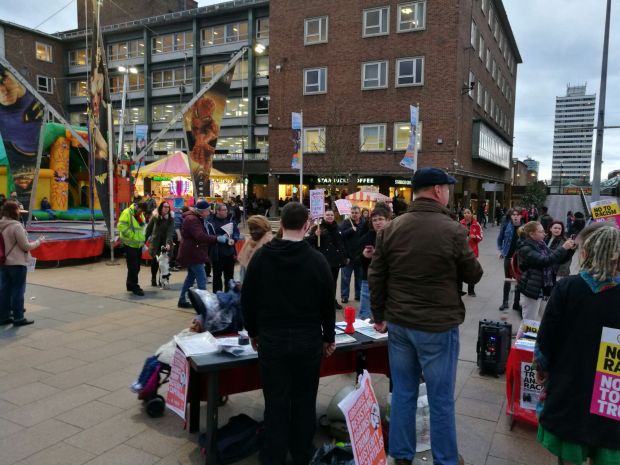 Coventry once again joined nationwide protests against the proposed state visit of Donald Trump, organised to coincide with the parliamentary debate which was prompted by close to 2 million people signing a petition against the state visit. The protest was called by Coventry Stand Up To Trump.

Dozens of people joined the protest, with many more hearing the anti-Trump message as they left work in the city centre. Speakers from Coventry TUC, Coventry Against Racism and others talked about Trump’s divisive agenda and why it must be stopped.

Socialist speakers pointed out how Trump is a symptom of a sick capitalist system, and through his actions he is actually uniting more people together as they join up to oppose him.

The Socialist Party will look forward to continuing the protests against his state visit and putting forward a socialist alternative to Trump and his system. 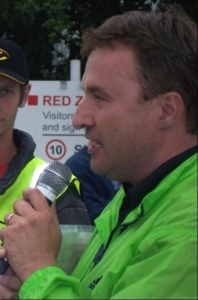 To celebrate International Workers’ Day we are proud to present this rare footage of the late Rob Windsor addressing a youth protest in Coventry in 2010. Rob sadly passed away on 14th January, 2012 aged just 47.

A former Socialist Councillor in St Michael’s ward,  a leader and organiser of the anti poll tax battle and community campaigner on many issues – from housing rights and fighting the PFI in the NHS to organising protests in solidarity with the Palestinians, Rob was a well known presence in many battles involving working class people against the establishment.

It is characteristic of Rob that he would show support for this protest of young people which was organised by Socialist Party members against increases in tuition fees. Rob’s speech starts at 3 mins 24 secs.

Thanks to Rob McArdle for the footage 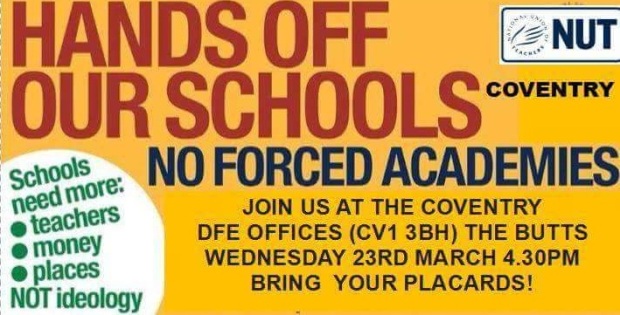 Trade unionists protest in support of workers at Sports Direct 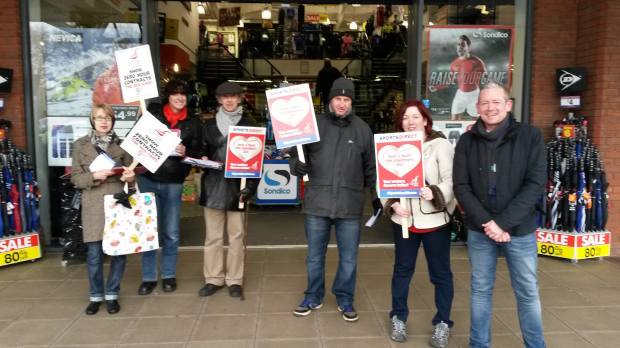 Trade unionists in Coventry organised a protest on Saturday morning against the employment practices of retailer Sports Direct.

Members of UNITE with other union activists assembled outside the store based at the Central Six shopping area to hand out leaflets and to urge shoppers to sign petitions in support of decent conditions for Sports Direct workers.

The UNITE leaflet highlights that ‘90% of the workforce at Sports Direct’s high street shops are employed on zero-hour contracts. They have no future, and no security whatsoever as they don’t know how many hours they will work from one week to the next, with no sick pay or holiday pay and no guarantee of work’ 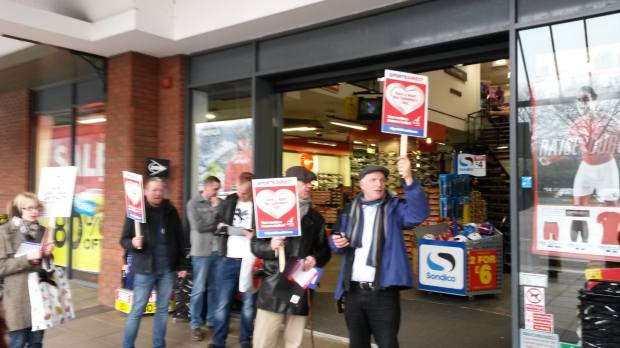 Hundreds of leaflets were distributed to make people aware of what is taking place. In many ways the situation at Sports Direct is a glimpse of a potentially disastrous future for the majority of the workforce in the UK. This is where the Tories and the employers would like to take us. We need to fight to build and rebuild our trade union movement on militant and socialist lines, to not only campaign against the bosses and their unfair practices but also against this crisis ridden capitalist system.

Why we’re protesting against austerity 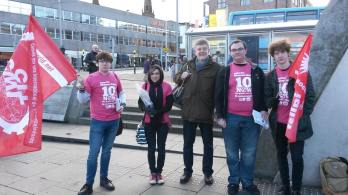 We asked some of the people supporting the anti-austerity protest in Coventry on Wednesday 27th at 5pm in Broadgate why they believe it is important to take part. The protest has been initiated by Youth Fight for Jobs and has the backing of Coventry TUC, Coventry Unison, and Coventry Peoples Assembly.

Here’s what they said. 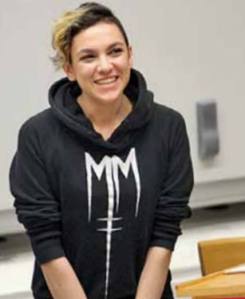 “I’m protesting, not only because of the Tories’ previous privatisations of vital services such as the Post Office and the outsourcing of disability benefits to ATOS whose “fitness-for-work” assessment has wreaked havoc for hundreds of disabled people, but also because of the recent announcement to sell £780million of the NHS to 11 private firms. From recent privatisations of the NHS we have seen that it is inefficient and provides poor treatment for patients, further privatisation will be a disaster for the public. Cameron has promised the world’s first seven day healthcare service but that’s an absolute joke if his current plans for mass privatisation go ahead unhindered. My friends and I will be at the protest to show our anger at the government’s austerity plans and to show solidarity to those who are suffering under his regime.” 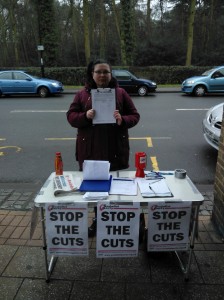 “I’m protesting because Coventry Council wants to close Tile Hill library, Sure Start centre and youth centre, which will rip the heart out of this community. Every library outside the City Centre is threatened with closure – we shouldn’t let them close any!” 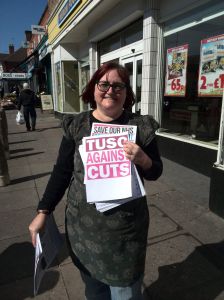 “I will be standing alongside young people and students at the protest on Wednesday in defence of education and city services. This government is blaming teachers and schools through unnecessary testing, slashing budgets and enforcing privatisation through academisation. It is doing nothing to improve the life chances of young people or to end child poverty. We did not vote them in and we will fight back against all cuts to jobs and services.” 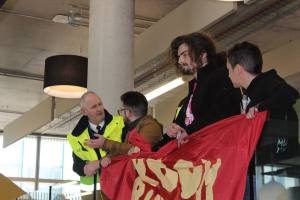 “I’m supporting the protest because young people didn’t cause this crisis, but we’re paying for it. We’ve had tuition fees trebled, EMA taken away and housing benefit for young people slashed. Most of us can’t get jobs, and the jobs we can get are mostly low paid and on zero-hour contracts. Young people didn’t vote for Cameron’s austerity – but teenagers who can’t even vote are going to suffer because of him.”

The protest is on Wednesday May 27th at 5pm in Broadgate. Please join us and build the fightback against austerity!

We encourage people to attend the massive anti austerity demonstration in London on 20th June organised by the People’s Assembly. There will be transport from Coventry, get in touch to find out more.

To put an end to austerity we will need to build a socialist movement to end capitalism. To help us and to get involved, click here