Vote for TUSC – no to austerity! 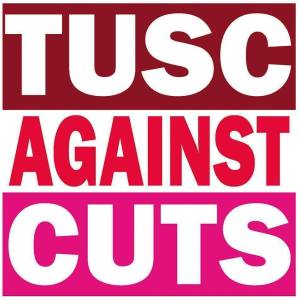 As previously reported on this site, the Trade Unionist and Socialist Coalition (TUSC) is standing in all 18 seats in the local elections taking place on Thursday 5th May in Coventry.

We urge you to vote for the TUSC candidate in your ward to help build the opposition to the cuts being inflicted on to this city by the Tory government, and being dutifully implemented by the Coventry Labour council.

These cuts include closing libraries and replacing staff with unpaid volunteers, shutting play centres, making 1000 workers redundant within the council and closing public toilets across the city. Labour have also signed us up for George Osborne’s West Midlands Combined Authority without giving the people of Coventry a vote on the matter.

The Labour Council has increased its reserves to over £84 million; however they refuse to use any of this money to hold off the cuts and build a serious campaign to win back the money for Coventry which has been stolen by the Tories.

Our candidates include former Labour MP and Socialist Councillor Dave Nellist (St Michaels), leading libraries campaigner Sarah Smith  (Woodlands), Simon Evans (Foleshill) who organised the campaign in defence of the last two play centres in Coventry that have been threatened with closure, and community campaigner Rob McArdle (Lower Stoke). We are proud to have young workers, trade unionists and students as our candidates.

See the end of this article for the full list.