Why I’m standing for TUSC in Woodlands 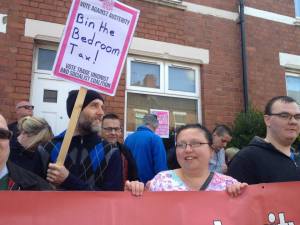 Our candidate in Woodlands is local campaigner Sarah Smith. Sarah explains below why she is standing as a Socialist candidate

I have been an active supporter of the Save Coventry Libraries campaign since the campaign was set up and I support the campaign to save Woodlands School as well as other local services. I also helped to start Coventry against the Bedroom Tax, working with other campaigners to stop being residents being evicted.

Unlike the local Labour candidate Patricia Hetherton, and other Labour candidates in Coventry, I support Jeremy Corbyn’s anti-austerity policies in words and deeds and I will stand up and fight to save our services against vicious Tory attacks being implemented by the Labour Council.

The trade unions UNITE and UNISON have passed policy that calls on the council to use some of the £84 million of reserves to hold off the cuts, which would buy time for a mass campaign to be built. Do the other candidates also support union policy on this?

While local Labour leaflets carry the headline “Save Our School”, their Councillors supported the establishment of Finham Park 2 which has contributed to the school being threatened with closure! I’m against academies and free schools, and support teachers, parents and pupils who campaign against them.

I am standing as part of the Trade Unionist and Socialist Coalition (TUSC) because it’s a true left wing socialist alternative, made up of working class people like me. I will continue to campaign for the people of Coventry, and against the capitalist lie that austerity has to happen.

Live in Woodlands and want to help Sarah? Get in touch by completing the form below!