University Workers to Strike Back 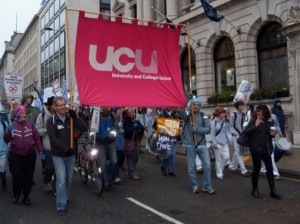 By A Socialist Party Member in UCU in the Coventry area

31 October will be a day of coordinated strike action by UCU, Unison and Unite members working in Universities. This is the first UK-wide joint action between these Higher Education unions, demonstrating the anger that their members feel about the employers’ insulting 1% pay increase.

Even pro-capitalist commentator Will Hutton, writing in the Observer notes that “The real wages of academics have fallen by 13% since 2008, one of the largest sustained wage cuts any profession has suffered since the Second World War.” This is despite the scandalously high fees charged to students, which have subsidised lavish pay at the upper echelons of University management while ordinary teaching, research, and support staff struggle.

We want a publicly funded system of Higher Education, free at the point of use and paying a fair wage to its workers. In addition to real-terms pay cuts, casualisation of all jobs is rife in the sector, including use of fixed-term, hourly-paid and even the now-infamous ‘zero hours’ contracts. This job insecurity together with management bullying and excessive workloads will also motivate UCU members to undertake a ‘work to contract’ following the strike day.

Many student organisations, including official students’ unions, have offered support. It will be vital to build on these links and make clear to students that this industrial action strengthens their fight for free education, particularly if exam marking ends up being affected. Already propaganda about the USS pension scheme has tried to pit students against staff – in fact this scheme is healthy in any reasonable measure, and a bizarre accounting practice is being used to claim students will end up ‘bailing out’ their lecturers’ pensions. Nothing could be further from the truth, but this and similar falsehoods will be peddled by the ConDem Government and their media chums if the dispute continues.

This and other elements of a serious fighting strategy could see a victory in the form of a significantly improved pay offer. But ultimately the dispute has arisen from the politics of austerity and we need to make links with other unions – our members already look to the disputes that other unions are involved in -and the call for a one-day general strike against austerity is gaining ground. Socialists in Higher Education unions will fight to make it a reality.