It is enormously saddening to mark the passing today of Tony Benn, a friend of 40 years. He was a towering socialist.

I first worked with Tony on the 1975 Common Market referendum; hundreds filled the Police Assembly Hall in Coventry to hear him speak, with hundreds more outside.  He spoke for me at a 1987 General Election rally, and hundreds came again to hear him in Coventry’s Methodist Central Hall; as they did 5 years ago when he came back to do one of his “fireside chats”. 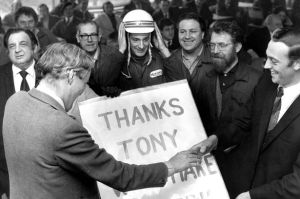 In between we worked closely in the 1980s, especially supporting the miners’ strike and challenging the attacks of the Thatcher government on working people. 11 years ago we worked together on the Stop the War Coalition national committee, preparing the massive February 2003 anti-war demonstration.

There will be dozens of quotes by him remembered today. One of my favourites is a definition of his often aimed in speeches at Rupert Murdoch:

“What power do you have; where did you get it; in whose interests do you exercise it; to whom are you accountable; and, how can we get rid of you?”

The Tony of the 1970s and 1980s, arguing for public ownership and supporting workers in struggle, could still be held in genuine affection and support 30 years later, more perhaps than any other figure on the Left.

But everything Tony said and stood for during that period should have led him to the conclusion that Labour from the 1990s onwards had fundamentally changed. It was now a prison, and he’d been reduced to smuggling out notes through the bars.  He should have left the Labour Party which had so clearly left him.

If he’d broken with right wing New Labour and joined those of us, like Bob Crow, seeking to start anew, politics in Britain would be so different today. A call by Tony to found a new independent political voice for working people would have gained an echo from tens perhaps even hundreds of thousands of people.

The consensus politics of today, the overlapping agenda promoting austerity, needs an organised political alternative.  Tony often said ‘politics should be about policies not personalities’. The socialist policies he stood for were killed off by successive Labour leaders from Neil Kinnock onwards; but they still exist today in new projects like TUSC.”